Scherrman brings talent and commitment to the diamond 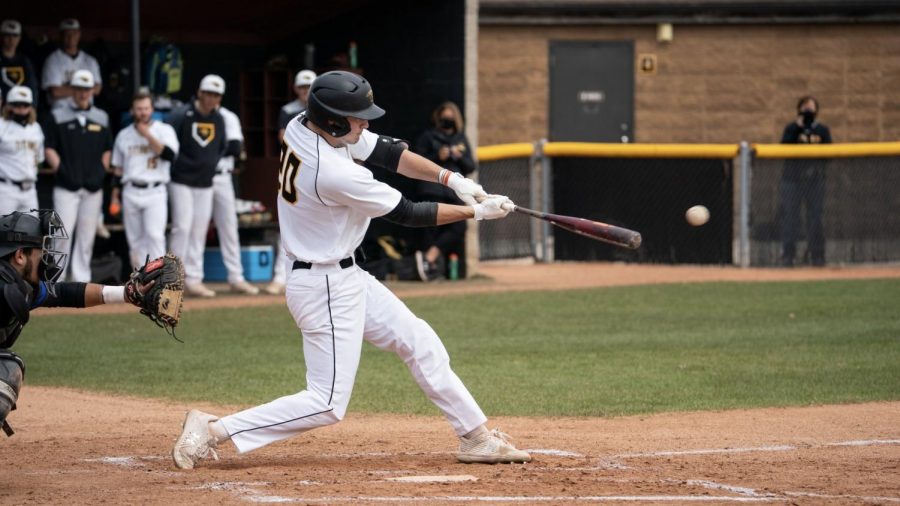 With the UW Oshkosh baseball team approaching the final 15 games of the season, freshman pitcher and infielder Matt Scherrman has been putting on a clinic both at the plate and on the mound.

Through the team’s first 23 games, Scherrman has a .323 batting average, three home runs and a runs batted in total of 32 that is third best on the team.

Even during high school, Scherrman was known for his work ethic and ability to bring up his teammates.

Scherrman himself also makes a point to put all of his effort into his workouts for optimal performance on the field. He takes every opportunity he has to get better extremely seriously.

“Whether it’s morning practice or lifting, I try to work as hard as I can,” he said.

Shultz said he enjoyed coaching Scherrman in high school since Scherrman was very receptive to instruction. He also said Schermann has a prominent competitive fire in him at all times.

“He was always willing to listen and ask questions,” he said. “He was a joy to coach. Matt has a very calm exterior and strong internal desire to beat you.”

Along with his competitiveness, Scherrmann gained the trust of his high school pitching coach to a greater extent than most.

Shultz said he trusted Scherrman so much that he even lent him his keys when he needed something brought to practice.

“[Matt is] the only player to this day I’ve given my car keys to and asked him to pick up some materials while we were doing some field work, not only once but twice,” he said.

Once Scherrman learned the art of pitching, it quickly became his favorite aspect of the game.

He said he enjoys being the first line of defense against the opposing team, along with the hefty responsibility that comes with taking the role.

“[With] pitching you are in total control of the game,” Scherrman said.

Schermann was a two-sport athlete at Wheaton, playing both baseball and basketball, but when it came time to commit to a college, baseball was the obvious decision for him.

Schermann stated that he is far better at baseball than he is at basketball, and the atmosphere at UWO drew him right in to play here.

“Growing up, I was always better at baseball,” he said. “When I was looking at schools I knew I wanted to play baseball somewhere, and Oshkosh was the best fit for me.”

Scherrman has quickly become a leader for the Titans, sitting in third place in the WIAC with a 13-10 overall record, and he recognizes how fortunate he is to be able to start on a college baseball team as a freshman.

“I still have a lot to learn, but not everyone has a chance to play right when they get to college,” Scherrman said. “I was lucky my position was open.”

The fact that Scherrman is starting both as a pitcher and a middle infielder isn’t all luck, though, as Shultz said that Scherrman’s consciousness of game-time situations is impeccable.

“[He has a] great awareness of everything happening on the field,” Shultz said.

Along with his awareness, Scherrman has an appreciation for the sport of baseball that extends far beyond how he is able to grow on the field.

Scherrman said the trial-and-error sequence of baseball is comparable to life and that it is important to learn from your faults in both areas.

“Learning from mistakes and failures would be one of the biggest takeaways from playing,” he said. “Baseball is a game of failure. Learning from what you did wrong and fixing it is a valuable lesson that can be applied to life, too.”

As Scherrman continues his first of four years as a member of UWO’s baseball team, he said that he is going to cherish every bit of it.

“I only have four years to play this sport, and I know I am going to miss it when it’s all over,” he said.