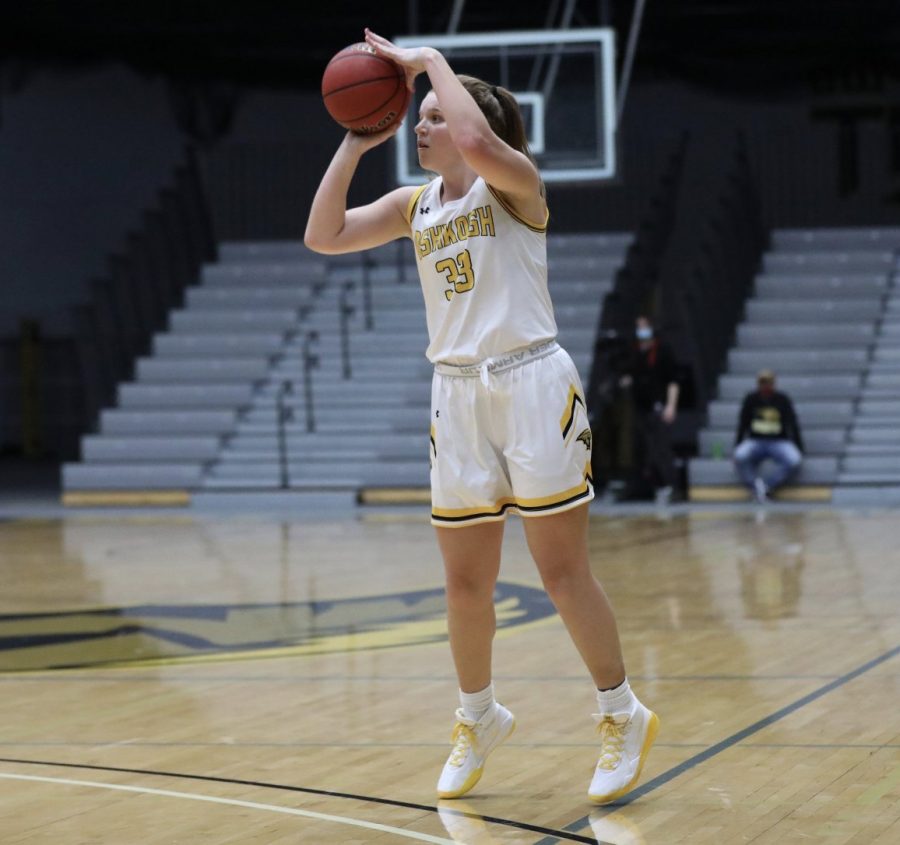 Photos courtesy of Leah Porath and Nikki Arneson Porath and Arneson are both seniors on the UWO basketball team, and they have helped the team in becoming Wisconsin Intercollegiate Athletic Conference (WIAC) champions in each of the last three seasons.

With the increasing rating and wage gaps between men’s and women’s sports, UW Oshkosh women’s basketball athletes have taken notice of the disrespect for women’s sports on a daily basis.

A large reason for this gap is the ratings gap. According to wsn.com, a sports reporting database, the 2019 NBA Finals brought in 15.14 million viewers while the entirety of the 2018 WNBA season brought in 231,000 viewers.

UWO women’s basketball player Nikki Arneson said the lack of media coverage for the WNBA is partially responsible for the sizable gap.

The spotlight on the mistreatment and overall neglect of women’s sports became even more prominent when a video comparing the men’s and women’s weight rooms in the 2021 NCAA March Madness tournament was posted by Sedona Prince, a University of Oregon women’s basketball player.

The video showed the men’s teams having all kinds of weightlifting machinery, and all the women received was a rack of dumbbells.

“I was angry and frustrated. I expected a lot better out of the NCAA; it was literally a slap in the face to all women athletes,” Arneson said. “A lot of the outsiders and even people within the NCAA don’t fully understand and see how much time and commitment student athletes as a whole put into their team and their sport.”

A similar video was released showing that the NCAA also served the male athletes buffet-style meals where they could go up for seconds to fill their plates, while the female athletes were given little frozen food packs to take back to their rooms.

UWO women’s basketball player and NCAA Division III All American Leah Porath went on an episode of a sports podcast, “All Sports Now,” that was dedicated to bringing more recognition to women’s sports. She said the treatment of women athletes was unacceptable.

“Apparently us women don’t eat or something,” Porath said.

Once both videos gained enough traction, the NCAA quickly gave the women’s teams better weight room equipment. All of a sudden, ESPN and Sportscenter were posting more about the women’s NCAA basketball tournament.

Prior to the weight room video being released, the women’s college basketball games were hardly given any coverage. Porath said she understands that there isn’t a sufficient amount of money to pay WNBA players more than what they make now, but she also said that it’s hard to garner a large viewership when the games are hardly televised.

“It’s not treated equally viewing wise,” Porath said. “Yeah, you don’t have the money to pay the women, but you’re not giving them an equal chance to generate that money like the NBA does.”

Porath also said she was pleased to see the weight room situation push sports media outlets to take a step in the right direction for equality.

“I think the publicity went up, especially from the weight room situation,” she said. “It’s kind of fun to be able to see people like JJ Watt and others tweet about women’s basketball.”

Arneson said that the increased television coverage on the women’s tournament symbolized the start of a huge movement.

“Big TV stations have started to televise more WNBA games,” she said. “The national tournament games are being televised more widespread than ever before, and there have been record numbers of viewers for those games as well. I truly think the support and appreciation of women’s sports are on an uphill climb.”