UWO inducts largest class yet into Titan Hall of Fame 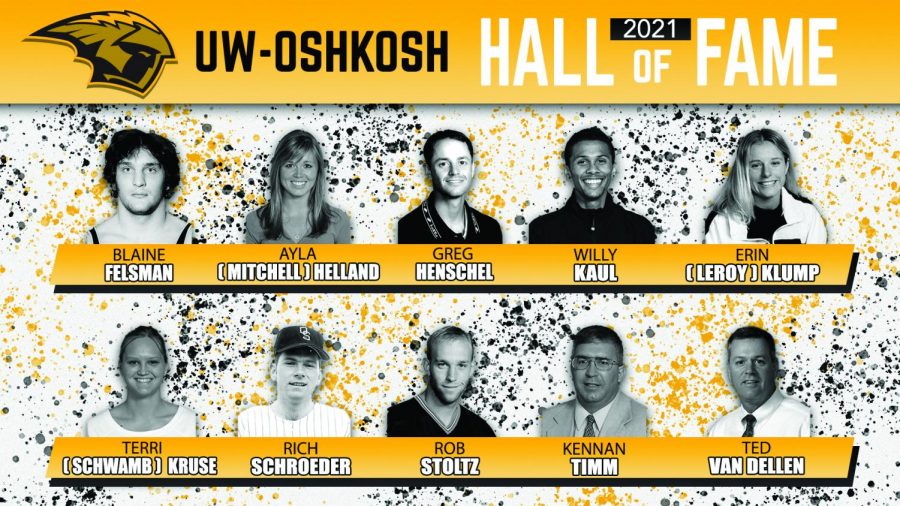 UW Oshkosh will be inducting a record-high 10 people into the school’s athletic Hall of Fame in 2021.

The 2021 UWO Hall of Fame class features a mix of former student athletes, coaches and administrators in the athletic department.

Timm, inducted after 37 years of service in the athletic department, said that this year’s Hall of Fame induction class was larger than normal due to the fact that there were no inductees in 2020 because of the pandemic, as well as the overwhelming athletic talent at UWO in recent history.

“We enlarged the inductee amount to 10 to kind of make up for the year lost and due to the overwhelming success of our athletic program in both the men’s and women’s side,” said Timm, who is on the induction board with 12 others.

He said 10 inductees were chosen from 18 candidates to be a part of the 2021 Hall of Fame class.

Timm also said there are currently 115 candidates eligible for the Hall of Fame going into next year, including the eight who did not get selected for this year’s class.

“Those are people who met all of the criterias that are eligible to be inducted,” he said. “Fifteen people received votes as well.”

Helland, who claimed five All-America citations and six conference championships in track and field while also winning two NCAA Division-III titles in 2009, said that she was not expecting to be told that she was getting inducted into the Hall of Fame, but that she was thankful for the opportunity.

“I was surprised to get the phone call and was very excited and grateful that they thought of me,” Helland said.

Felsman, who finished second in the heavyweight division at the 1976 Wisconsin Intercollegiate Athletic Conference (WIAC) Championship for wrestling and was named to the All-WIAC Second Team for football in 1977, said that his great connection to the university made the honor of being inducted into the Hall of Fame so much more special.

“This is a phenomenal honor for me after many years. UWO has been like a second family to me, even after attending and competing for so many years,” Felsman said. “[I have] so many great memories of great coaches and teammates.”

Timm, who has been the host media relations director for the finals of 31 NCAA Division III Championships as well as over 50 Division III regional tournaments throughout his ongoing 37 year tenure as UWO’s sports information director, expressed a great amount of gratitude in being able to be a part of an athletic department that is as accomplished as UWO’s.

“I have been totally blessed to be here for 37 years,” he said. “I am very proud to be a part of an athletic program that has enjoyed a tremendous amount of success at the conference and national levels.”

The induction ceremony will take place on Nov. 7 at the Culver Family Welcome Center. Tickets for the ceremony are $25 for anyone over the age of 4. They will be sold on uwosh.universitytickets.com until 10 a.m. Nov. 3.