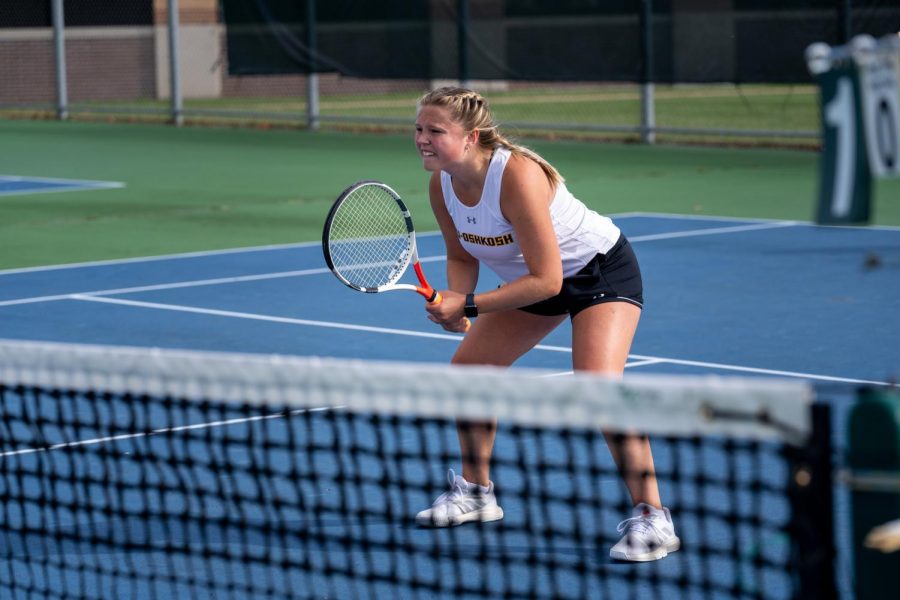 The UW Oshkosh women’s tennis team is in search of their first win after dropping consecutive matches 5-4 against Lawrence University on Sept. 9 and 5-4 against the Milwaukee School of Engineering (MSOE) on Sept. 22.

The two recent matches were close enough to indicate the team’s growth in comparison to last year, where the team went winless throughout the season.

Before the two matches, UWO lost their season opener against the UW-Whitewater 9-0.

Alyssa Pattee, a freshman from Waupun, said that the size of UWO’s team is much smaller than her high school team. She also stated that this decreased team size helps out with team chemistry at the collegiate level.

“On my high school team I had about 20 teammates. [This] made it hard to get to know everyone individually, but on the UWO team it is much [easier],” Pattee said. “I feel I have been able to really connect with my teammates to the point of calling them my friends.”

For a rebuilding program, leadership is of the utmost importance. Pattee said freshman Jade Schwichow has risen to a leadership role due to her positive mindset about the sport and the team’s performance as a whole. She also stated that Schwichow is consistently encouraging her teammates during matches and practices.

“Jade is the most enthusiastic person on the team. You will always hear her supporting and cheering for all players,” she said. “As with match play, she also brings that excitement to practices, which is much appreciated.”

Consistent with two of UWO’s four wins against Lawrence being close three set matches, Pattee stated that the will to continue fighting is a prominent strength that she noticed this season. She also said that this strength can lead to wins for the team in the near future.

“Even though we have come up short by one match the last two weeks, everyone gave it their all and never gave up,” Pattee said. “With this mindset, we know our team can win against our upcoming competitors.”

Despite UWO’s 0-3 record on the season, Pattee said that she feels optimistic about the team’s future once everybody gets enough repetitions under their belts. She also stated that those who had played singles or doubles in high school and are having to switch over are still a few practices and matches away from adjusting to their new roles accordingly.

“Many of us only played singles in high school, so we have to switch gears and learn the techniques of doubles play,” she said. “With our competitors, you can definitely tell which doubles teams have been playing together for a few years and I know we will get there.”

UWO played UW-Stevens Point in a home match on Sept. 29, and the results are on the UWO athletics page.