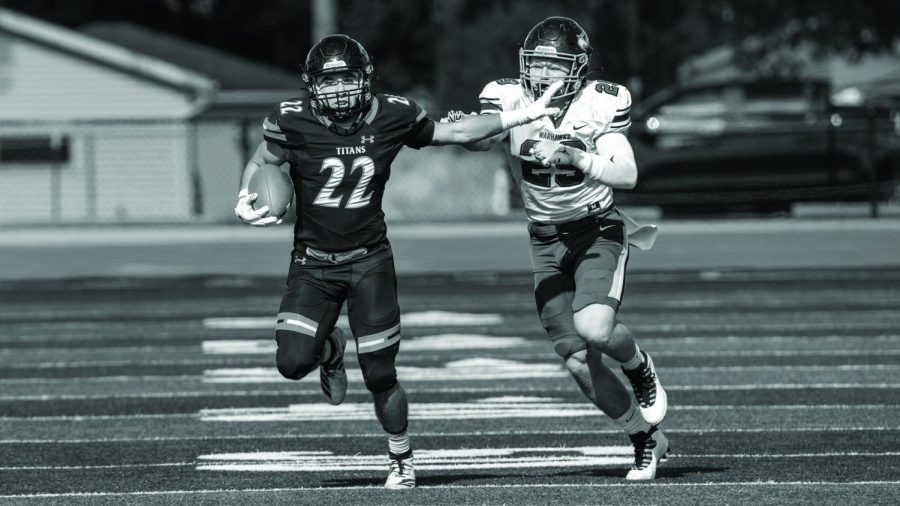 The Titans opened the scoring in the first quarter with a 2-yard shovel pass from quarterback Kobe Berghammer (his seventh passing touchdown of the season) to senior tight end Justin Kasuboski. Kasuboski now has three touchdown receptions on the year to go along with 144 receiving yards. Neither team would score again in the first quarter, but the Warhawks would score 22 unanswered points in the second quarter. With 11:21 to go in the second quarter, quarterback Max Meylor found wide receiver Tyler Holte in the endzone to tie the game at seven. On the ensuing kickoff, kick returner Jaylen Grant was called for an illegal forward pass in the endzone, resulting in a safety. Whitewater scored on their next drive following a 5-yard Maylor pass to running back Alex Peete. Kicker Matt Maldonado missed the extra-point wide left to put the score at 15-7 UWW. Later in the second quarter Berghammer was picked off by Ryan Liszka, which set up another Whitewater touchdown five plays later. Peete scored on a 1-yard rushing touchdown with 39 seconds left in the first half to increase the Warhawk advantage to 22-7.

In the third quarter, the Titans pulled to 22-13 after a spectacular catch by wide receiver Trae Tetzlaff. Berghammer found Tetzlaff in the back of the endzone, who reeled in a one-handed catch over a Warhawk’s defender. This is Tetzlaff’s second touchdown of the year and is averaging 12.8 yards per reception. UWO attempted a two-point conversion, but Bergammer’s pass was incomplete resulting in a 22-13 lead for UWW. On their next possession, the Titans had a chance to cut the game to six, but kicker Jaydon Haag missed a 41-yard field goal wide left. Haag still has not made a field goal this season, going 0-4. Following the miss, UWW drove down the field and made a field goal of their own, increasing the lead to 25-13. Berghammer would leave the game and go to the locker room, and freshman Cody Staerkel got his first real minutes of action in his career. His first pass attempt of his career was intercepted and returned for a touchdown by Liszka. The game would end 32-13 UWW.

After the game, head coach Pat Cerroni said, “The first and third quarter went extremely well. They are a very good football team. We had a few special teams mistakes, and it’s their year this year and I’m not afraid to say it.” When asked about why his team wasn’t able to finish strong for the second week in a row, Cerroni said, “I don’t know, I wish I knew.”

The Titans will face UW-Eau Claire on Saturday Oct. 23 at 1:30 p.m. at J.J. Keller Field at Titan Stadium. In their Homecoming game, UWO will face a Blugold team that is 3-3 and 1-2 in WIAC play. When asked about how Eau Claire looks, Cerroni said, “Everybody’s good in this conference. They look really good. Its not about Eau Claire right now its about us we need to put a full game together. We need to not make mistakes on special teams, score and stop the other team from scoring.” The Blugolds will be led by running back Austin Belot, who already has 927 rushing yards and seven touchdowns in six games this season. “Number 5 [Austin Belot] is a very elusive running back. He’s fast as s—, I’m not gonna lie to you,” said Cerroni about Belot. The Titans will look to get a win on their 100th homecoming on Saturday.