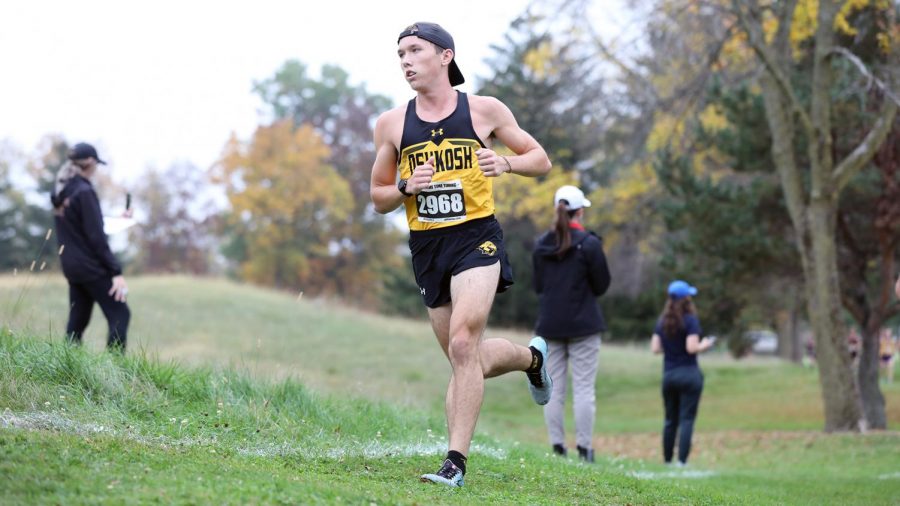 Courtesy of UWO Athletics Runner Cody Witthun gets second place with a time of 27:09. which is a pace under a 4.5 minute mile.

UW-La Crosse took first place in the meet UW-Whitewater took second while featuring the fastest runner of the championship, which featured 95 runners, in senior David Fassbender, who ran eight kilometers in a time of 24:35.

UWO’s top runner for the competition was senior Cody Chadwick, who clocked a time of 25:26, and his time was good enough to make him the 10th fastest runner in the field.

Junior runner Ryan Dolnik said he was very pleased with how he did considering the fact that he didn’t feel as though his training went well in the summer. Dolnik, whose best time of the season was 27:03 at the Lawrence University Davis Invitational, also said that he was very proud to be able to compete in the conference competition.

“Personally I’m very happy with my performance,” Dolnik said. “Coming off a rough summer of training I wasn’t having high expectations but I managed to have a good season for myself, even earning a conference spot.”

Dolnik, who finished 62nd overall in the WIAC championship with a time of 27:20, stated that the expectation going into the meet was to finish in the top three as a team. He also said that even though the team achieved that goal, it wasn’t the team’s best performance.

“Placing 3rd at conference was the expectation going into it, [but it] wasn’t the best outing,” he said. “However, if on a bad day we meet expectations, then a good day will certainly exceed them.”

UWO placed first at the Lawrence University Gene Davis Invitational on Oct. 9 and at the UW-Whitewater Open on Oct. 22.

Dolnik stated that being around others who have the same aspirations as him has really helped improve his performance throughout the year.

“Just the team dynamic [is my favorite],” Dolnik said. “Having a bunch of people with the same goal as you is a great motivator, and these guys are an awesome group.”

Dolnik, who is running in his final season as a UWO runner, said that cross country has helped him balance his priorities and focus on hard work instead of focusing on just getting by with average results. He stated that he has really been able to push his limits this year.

“It’s helped me manage my priorities, especially with this year being my final season,” he said. “It helped me to focus on the goals I had and really fine-tuned the belief that you can’t just coast by.”

UWO will go on to compete in regional competition at the Ripon College Red Hawk Open at the Tuscumbia Golf Course in Green Lake.

Dolnik said this team is very strong and that the team will be entering the regional competition with high expectations. He has faith in his teammates to show up and perform.

“As a team this is the best we’ve had here in recent years. The team just earned a third place finish in the WIAC and with regionals next weekend the expectations are high,” Dolnik said. “Our guys know what needs to be done and I have no doubt that they will show up on race day and earn a nationals berth.”