Titan football gets to the point on field 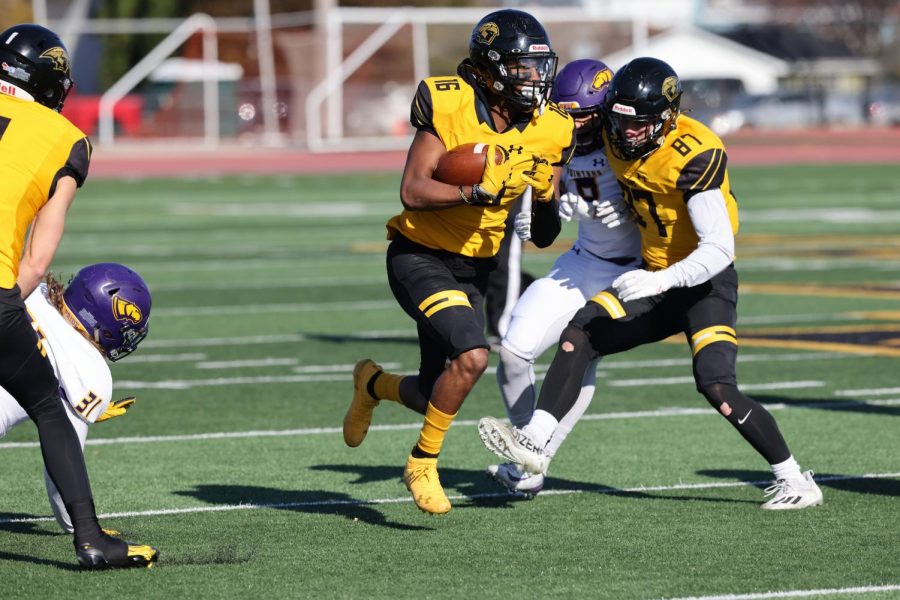 The UW Oshkosh football team defeated UW-Steven’s Point 49-17 on Saturday at J.J. Keller Field at Titan Stadium.
On their first possession, the Pointers scored on a Victor Ponterio 48-yard field goal to go up 3-0. The Titans would then score 49 unanswered points.

With 9:11 to go in the first quarter, running back Mac Winkler scored his first touchdown of the day on a 67-yard run. Mitch Gerhartz would score on Oshkosh’s next possession with a 17-yard rushing touchdown to put UWO on top 14-3.

Six seconds into the second quarter Winkler scored once again. Winkler’s 21-yard rushing touchdown increased the Titans lead to 21-3. With 10:30 to go in the first half, Point’s returner Jahi Stigall fumbled a punt, which was recovered by UWO’s Mackade Mella at the 1-yard line of UWSP. It would take the Titans only one play to score again. Mitch Gerhartz rushed for his second touchdown of the game, this time a 1-yard run. The Titans would score once more before halftime. Quarterback Kobe Berghammer found tight end Steven Makinen for a 21-yard touchdown pass. Going into halftime, UWO led the game 35-3.

After halftime, the Pointer’s quarterback Max Herro threw an interception to UWO’s Eli Tranel, which set up another Titan touchdown seven plays later. Berghammer found an open Tony Steger in the endzone to increase the Oshkosh lead to 42-3. This would be the last drive to feature Kobe Berghammer and the other UWO starters on offense, with freshman Cody Staerkel coming in as quarterback. Staerkel would lead the Titans down the field on their next drive and set up a three-yard Bryce Huettner rushing touchdown.

In the fourth quarter, the Pointers would score for the first time since their opening possession. Max Herro found Ernie LaSpisa for an 18-yard touchdown pass. With 6:45 to go in the game, UWSP scored once again, with Herro finding Jeremy Kobe for a 15-yard touchdown. Herro would be intercepted again, this time by CJ Sykes, to put the game to bed. The Titans would run out the clock, winning their sixth game of the season 49-17.

After the game, senior defensive lineman Alex Jagla said: “It was a great team win. We performed well in all three phases of the game: offense, defense and special teams.”

Berghammer went 12-21 for 163 yards passing and 23 yards rushing, with two passing touchdowns in the win. He now has 19 touchdown passes on the year and just three interceptions.

Mac Winkler led the team in rushing, with 114 yards on nine carries, which is his season best. Winkler’s touchdowns were his third and fourth of the year.

Bryce Huettner rushed for 29 yards and scored his first touchdown of his college career.

The win was Oshkosh’s ninth in the past 10 meetings with UWSP. The Pointers still lead the series 61-49-8 against the Titans in the WIAC’s oldest rivalry that began in 1896. The Titans moved to 19 in the d3football.com top 25 rankings after the win.

Head coach Pat Cerroni said UWO’s next opponent, UW-River Falls, is a good running team. “Number 6 [Luke Fugate] is a very good running back and is one of their best players,” he said, adding that UWFR is likely “to run the ball” and that the Falcons are a “no huddle 100 miles per hour team.”

UW-Oshkosh will play River Falls at home Nov. 13 in their regular season finale.