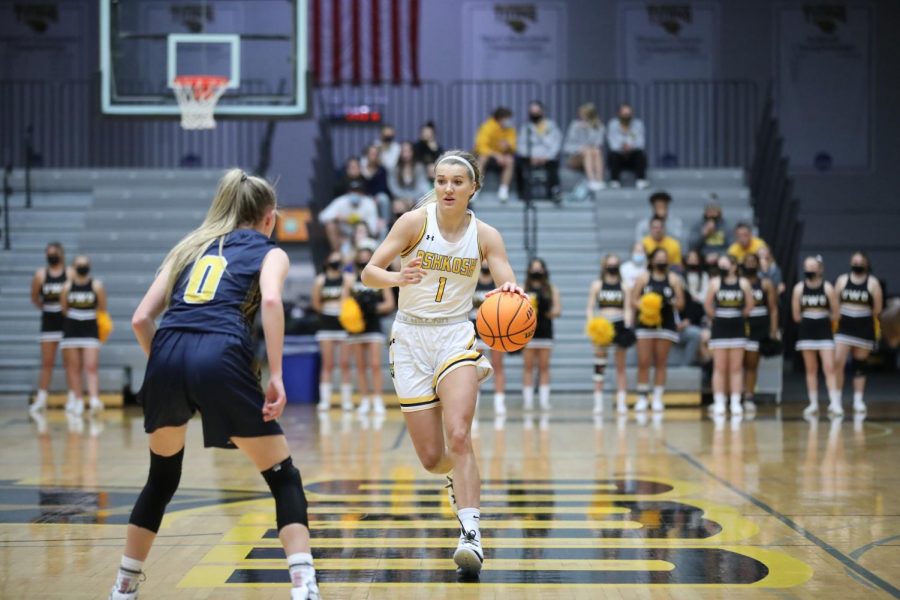 Courtesy of Steve Frommell Senior Julia Silloway takes the ball up the court while being defended by Kerstin Sauerbrei in UWO’s 79-40 home opener win against Lakeland University. Silloway had three points, five rebounds and four assists.

The UW Oshkosh women’s basketball team went 2-0 against Finlandia University and Lakeland University in their first two non-conference regular season games in over a year and a half.

The Titans came into the season ranked No. 17 nationally after finishing last year’s abbreviated season with a 9-2 record and their third consecutive WIAC championship win.

After dropping a pair of preseason games to the UW-Madison (Division I) and Michigan Technical College (Division II), the UWO team traveled to Finlandia on Nov. 5 to win their first regular season game 60-53.

Senior Nikki Arneson led the effort with 16 points and eight rebounds on a four-for-eight shooting effort from behind the three-point line, while senior and preseason All-American honors recipient Leah Porath added 10 points of her own while shooting two-for-four from beyond the arc.

Senior Abby Kaiser also put up 10 points along with six rebounds in the game.

The Titans shot just 28.3% from the field, but it was their consistency at the free throw line, going 27-for-29 or 93%, that pushed them to their first victory of the year.

Porath, who led the conference in points per game last year with 18.7, said that being able to play in regular season competition has her feeling optimistic as she looks ahead at the rest of the year.

“Playing in our first regular season game this past weekend got me more excited about the season finally starting,” she said. “I am excited to see where this season takes us and how we build upon our foundation.”

The Titans then came home and defeated Lakeland University 79-40 at their first game in Kolf Sports Center with fans in over a year and a half.

Arneson once again led the way in points (15) and rebounds (10) for her first double double of the season, while Porath added 14 points and sophomore Kayce Vaile put up a career high 11 points.

Porath, who has shot four-for-six from behind the arc to start off the year, said that her range was something she focused on in the offseason since the National Collegiate Athletic Association (NCAA) backed the women’s three-point line up from 20’9” to 22’1.75” (now equivalent to the men’s line) in June.

“With the three-point line moving back this year, a lot of my focus this summer was to get comfortable with that distance,” she said.

With former center Karsyn Reuth being the only member of the team who graduated, the majority of the Titans’ roster from last year has returned. Porath said she sees this returning roster as an opportunity to continue to build on the success achieved by this team in the past couple of years.

“With having most of the roster back from last year, it’s almost like we get to build from where we left off,” Porath said. “We already have that team chemistry on the court, we know each other’s strengths and weaknesses. As a team we were able to keep moving forward from day one.”

With the Titans’ last NCAA postseason run ending in the sweet 16 round due to the COVID-19 outbreak in March 2020, Porath said she wants to take this team deep into the playoffs to finish off her college career.

“My goal for this year is simple, and that is to take our team farther in the postseason than we have before,” she said. “I haven’t been farther than the Sweet 16 in my career, so I am looking to advance past that hopefully to a final four.”

UWO will travel to Minnesota to face Bethany Lutheran College (Minn.) on Nov. 12. Bethany Lutheran was the last team the Titans played in the 2020 NCAA Division III championship before the pandemic halted the tournament.

UWO will wrap up their weekend in Minnesota playing the University of Minnesota Morris on Nov. 13.