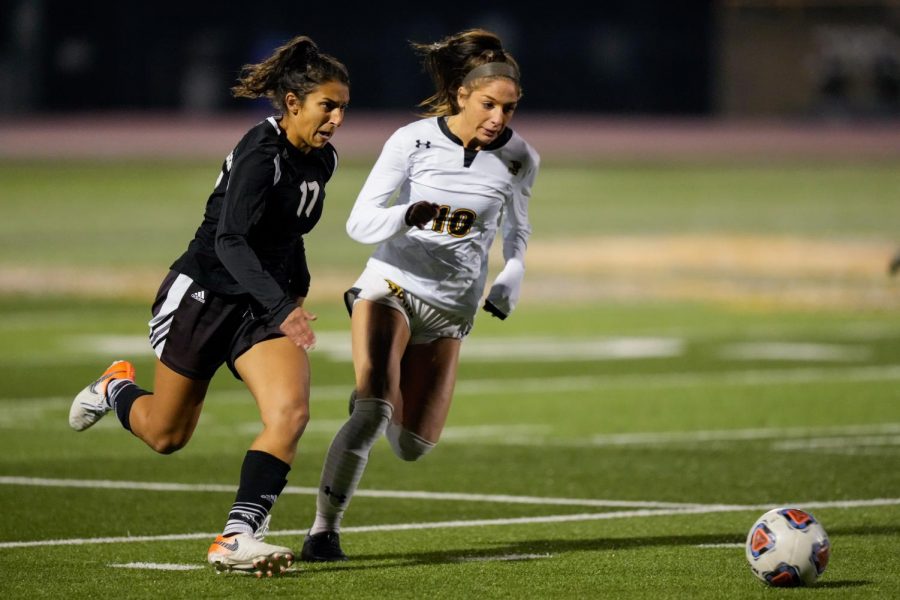 Courtesy of Terri Cole Forward Alexia Poulos evades a UW-La Crosse player on her way to the goal. Poulos has scored four goals this season

The Titans also won the tournament in 2014 and 2011, and now receive an automatic bid to the NCAA Division III Championship.

In the first half, Mackenzie Stein opened the scoring with an unassisted goal from about 15 yards out in the 21 minute. This goal was Stein’s fourth of the season and put the Titans on top early in the game. Minutes later, UWL would even the score with a goal from Ellie Arndt in the 24 minute.

The Titans responded when Mackenzie Bennett scored what would be the winning goal in the 32 minute. Bennett took a free kick from about 30-yards out and buried it in the back of the net for her sixth goal of the year. This was Bennett’s third game-winning goal in the last three games, as she scored in the 95 minute against UW-Eau Claire and the 96 minute against UW-River Falls.

Neither team would touch the score sheet again in the game, as the Titans went on to win 2-1.
After the match, Stein said: “The goal was absolutely insane. I left myself speechless to be honest. [It was] the best feeling I have had in a while. Honestly, [it] felt like a million bucks, but nothing compares to the feeling of the final whistle blowing, which sealed the deal of officially being WIAC champions. [I] loved celebrating with my team.”

UWO’s Erin Toomey saved seven shots against UWL, who was appearing in their fifth straight WIAC championship game, en route to win No. 16 on the year, the most in program history. Oshkosh has outscored its opponents this season 50-15 and have outshot their opponents 337-173. With the win, the Titans extended their home winning streak to 15 straight matches at J.J. Keller Field.

In order to reach the championship game, the Titans had to beat UW-Eau Claire in overtime 3-2 in the WIAC semifinal on Nov. 4. Bennett opened the scoring for the Titans on a free kick from 21-yards out in the 47 minute to go up 1-0. The Titans would extend their lead to 2-0 in the 51 minute after Mallory Knight scored from 6-yards out off a cross from Mackenzie Stein. Eau Claire came back and tied the game after goals from Emma Stange and Ava Quick in the 58 and 82 minutes, respectively. In the 95 minute, the Titans finally broke the deadlock. Rylie Kaufmann crossed the ball to Mackenzie Bennett, who headed the ball into the back of the net to send UWO to the WIAC championship game.

During the Nov. 8 NCAA Division III selection show for women’s soccer, the Titans were given a No. 2 seed in the tournament. UW Oshkosh will face Wheaton College of Illinois at 1:30 p.m. on Friday at Stagg Field in Chicago in the first round of the NCAA Division III Tournament.

“It was one of the best feelings I’ve had,” said forward Piper Green. “ We made history. There were so many emotions. We aren’t done yet though. We leave for the NCAA tournament in a few days.”