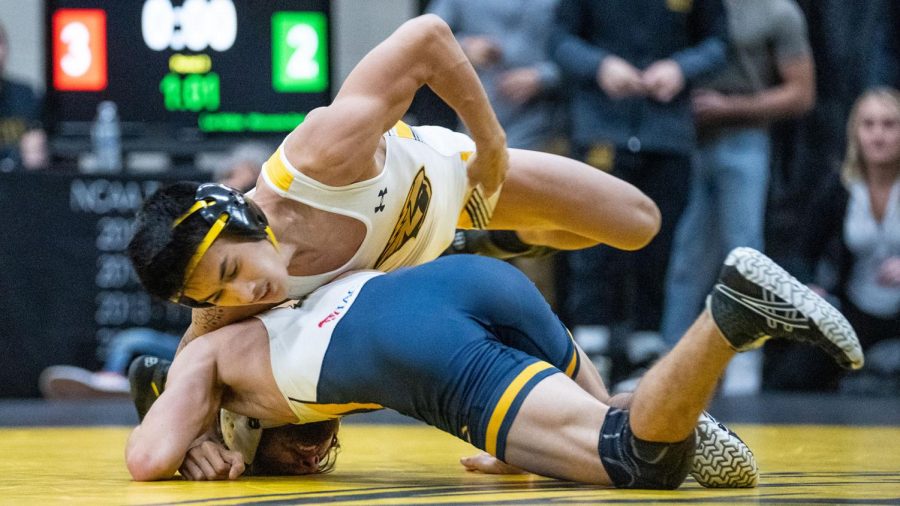 Courtesy of UWO Athletics Luc Valdez dominates his opponent on top at the Chancellor’s Cup.

The UW Oshkosh wrestling team defeated UW-Eau Claire 27-12 in the first dual meet of the season at Kolf Sports Center on Nov. 11. The Titans traded victories in the first half of the competition before gaining momentum and recording four straight wins in the upper weights.

This secured. their first conference victory of the season and the Chancellor’s Cup, awarded annually to the winner of the dual between UWO and UWEC.

“It was a big win for us. Eau Claire is a really tough team and we knew it was going to be a close match. A lot of matches could’ve gone one way or the other, but we won those matches. I was impressed with everybody,” said UWO head coach Efrain Ayala.

The meet began with an overtime victory by Titan 125-pounder Luc Valdez. At 133 pounds, Denis Murphy lost by technical fall to Javon Taschuk. The teams then traded wins at 141 and 149 pounds, with AJ Schoenfuss winning by pin in 1:16 and Brandon Lenczner losing to UWO’s Jake Drexler by a decision of 8-1.

The Titans gained momentum with a come-from-behind win courtesy of sophomore Preston Morgan. Morgan fell behind early in the match before coming back in the third period to secure a pin in 6:15 against Jared Stricker.

“I could tell he was getting tired towards the end,” said Morgan. “He went for a last chance throw and I was able to stick him right there.”

“Preston had to overcome; he was down by six points and came back by pushing and putting pressure on Stricker and finally broke him. It was a good match to build his confidence,” said Coach Ayala.

UWO kept the momentum going with a hard-fought win 3-2 by Patrick Curran at 184 pounds. 197 pounder Beau Yineman wrestled a dominant match against Sam Melton with a 7-2 decision, sealing the team victory by pushing the score to 24-12.

“We came in with good momentum after Preston’s win and got the job done. I just focused on doing what I had to do and
pushed through,” said Yineman.

The meet concluded with another exciting match when UWO heavyweight Jordan Lemcke won in sudden victory 4-2 over Mason Hawkins. The Titans won the team dual 27-12 and were able to celebrate on the mat with Chancellor Andy Leavitt, who was in attendance to accept the Chancellor’s Cup.

UWO wrestling also competed in Adrian, Michigan at the Adrian College Duals on Saturday. The team went 4-0 in duals on the day and improved their early-season record to 5-0 overall. Additionally, Valdez, Morgan, Yineman, and Lemcke maintained perfect 5-0 individual records through the first week of competition.

Coach Ayala accredits a good team environment and the success on Thursday to the dominant performance over the weekend.

“We kept moving with the momentum and the boys wrestled really well. [There was] a lot of energy. I think that’s the thing with this team right now; they’re a really tight knit group, and they’re excited to cheer each other on, and that’s what gets them to win those tight matches.”

Teammates Yineman and Morgan were both proud of the success over the weekend as well.

“We looked really good. As the day went on, everyone got more into their routine and we did what we had to do,” said Morgan.

“It was a fun weekend. We got fired up and had a great time,” said Yineman.

UWO wrestling is returning to competition on Thursday, Nov. 18th in conference action against UW-Stevens Point at the Kolf Sports Center at 7 p.m.