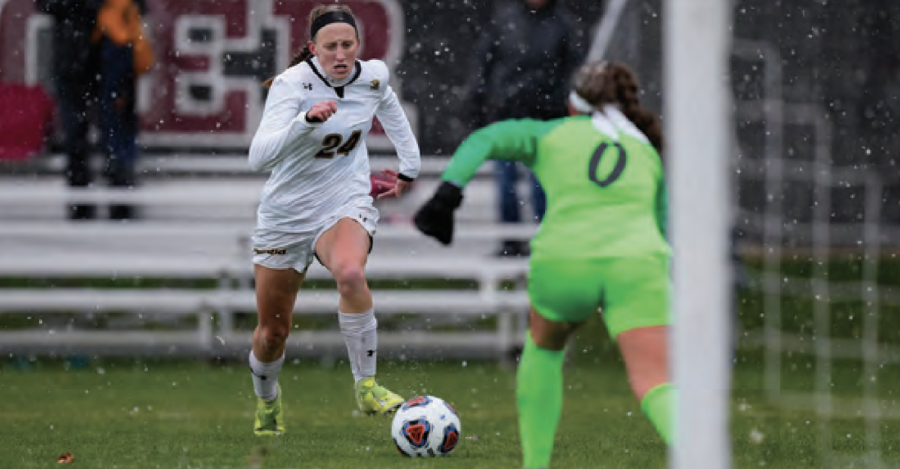 The Titans opened the scoring in the ninth minute when Rylie Kaufmann, who was dribbling on the right wing, launched a shot from 19 yards out that found its way into the back of the net, giving UWO an early 1-0 lead. The game would remain 1-0 until the 72 minute, when the Titans would strike again. Mackenzie Stein found Alyssa Gunderson who buried the ball into the back of the net for her fourth goal of the season, putting the Titans up 2-0.

At the 76 minute mark, Wheaton started their comeback. The Thunder would pull to within one after Oshkosh failed to secure the ball in front of their own goal and it ended up in the back of the net for an own goal. Wheaton would tie the game in the 84 minute after Audrey Sexson found a wide-open Zoe Lipke who scored her first goal of the year to put the game at 2-2. The game would remain tied until the end of regulation time.

“Our season was phenomenal,” forward Kaufmann said. “I can’t believe how much history this team made this season. The team’s chemistry was amazing this year on and off the field. I am extremely proud of everyone working their hardest to get where we wanted. Unfortunately, our game did not end the way we wanted it to. We were all very sad and frustrated about the game because we knew we should have won. But as a team we are looking forward to the next season and continuing on what we started this year!”

Titan forward Piper Green said it was the “most fun season” she’s ever played in.

“We made history multiple times and it was incredible,” Green said. “I think one of the best parts was the fans. We had so many fans at each game, more than we’ve ever had. We all worked together so well, and our hard work paid off. It was not the result we wanted at the NCAA tournament, but there’s so much to be proud of.”