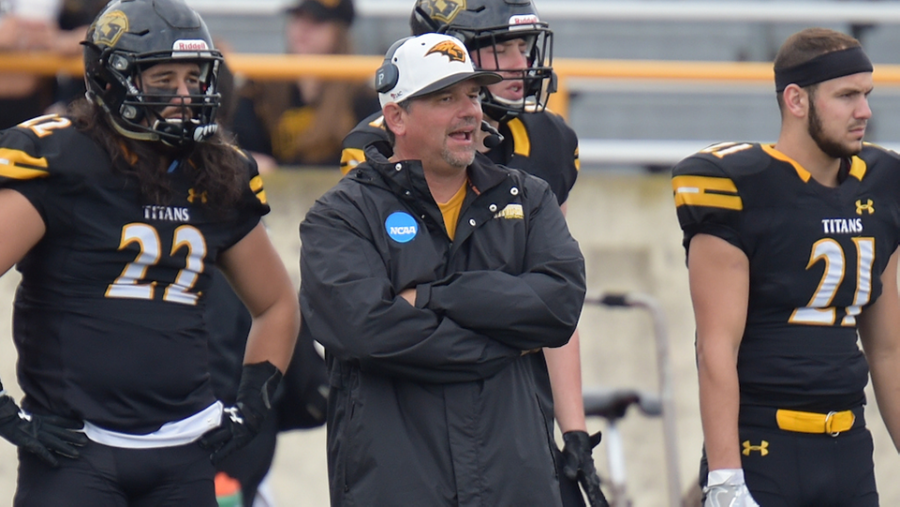 Courtesy of UWO Athletics During Pat Cerroni’s 15-season run as UW Oshkosh’s head football coach, he has amassed a win percentage of 69%.

UW Oshkosh head football coach Pat Cerroni formally announced his retirement on Monday. The news came as a shock to the program, as the football team had already begun to prepare for next season.

However, an article written by Miles Maguire of the Oshkosh Examiner stated suspicion that Cerroni resigned due to a violation of NCAA rules when funds from the Oshkosh Football Factory were used to pay numerous members of the assistant coaching staff.  But Assistant Chancellor Darryl Sims said that OFF funds were not used to pay the UWO salaries of UWO assistant coaches.

Cerroni revived the Titan football team, who struggled to win games before he took over from previous head coach Phil Meyer. It took the Titans 17 seasons to win 60 games from 1990-2006. Cerroni replaced Meyer in 2007 and compiled a 109-45 record in 15 seasons as head coach of the Titans. His 109 wins are the most of the 26 coaches to lead the Titans since 1895. In the Wisconsin Intercollegiate Athletic Conference, he ranks second all-time in wins.

Freshman quarterback Bennett Peterson said: “It was very shocking to hear that Coach Cerroni was retiring from coaching. Although it was sad to see him go, I’m happy for him and wish him the best of luck in retirement. Hopefully, he can stick around and see his impact on the Titan football program for years to come.”

Cerroni originally joined the coaching staff in 2000, as an assistant under Meyer. Previously, he coached at Hartland Arrowhead and Waukesha Catholic Memorial high schools. During Cerroni’s four seasons at Waukesha Catholic Memorial, he helped the Crusaders to Wisconsin Independent Schools Athletic Association Division 1 state titles in 1993 and 1996. A veteran of the U.S. Air Force (1984-88), Cerroni earned his bachelor’s degree from Carroll University in 1992 and his master’s from UWO in 2004 while he was coaching.

“Twenty-one years ago, I walked onto this campus and never realized what an impact it would make on my life,” Cerroni said. “It has been a great journey. In my time all decisions that we made were based on one simple question: ‘What is the best for the football program?’”

In his 15 seasons as head coach, Cerroni led the Titans to four WIAC championships and the school’s five NCAA Division III tournament appearances. These appearances include the program’s first visit to the national championship game in 2016, semifinal appearances in 2012 and 2017 and to the quarterfinal round in 2015.

“To all the players, coaches, and support staff, I loved every second!” Cerroni said. “No one can take away what we all accomplished.”

Cerroni’s tenure as head coach included 11 winning seasons, with a standout year in 2012 when the Titans won the WIAC Championship going 13-1. In 2015, the Titans would win the WIAC again, this time going 11-2. While Oshkosh would not win the title in 2016, they followed up with a strong 2017 season, going 12-1 and winning their 10th overall WIAC championship. UWO would earn a share of the WIAC title in 2019, as they beat UW-Whitewater in the final regular season game to go 8-3 on the year. The 2019 season would also be significant as Cerroni earned his 100th win against Eau-Claire. He won many personal awards as well, including WIAC Coach of the Year in 2012, 2015, 2017 and 2019. Cerroni was also selected the d3football.com West Region Coach of the Year in 2012 and 2017.

“It’s never easy saying goodbye, and it’s hard to know when the best time is to walk away,” Cerroni said. “I feel in my heart this is the perfect opportunity and what is best. My wife and I have been discussing this for over a year and right now it feels right”.

Off the field, Cerroni led the team in several community services projects, including events associated with the Oshkosh Boys & Girls Club, Oshkosh YMCA, Habitat for Humanity, Old Glory Honor Flight, Gus Macker 3-on-3 Basketball Tournament and Feeding America. In 2015, Cerroni received the Excellence In Leadership Award for his work with Be The Match, a national marrow donor program in which six of his players donated to.

UW Oshkosh Athletic Director Darryl Sims announced that assistant coaches Craig Stenbroten and Luke Venne will act as head coaches while the search for a new head coach begins. In the meantime, Cerroni has been reassigned to another position on campus where he will serve until his official retirement on July 5, 2022.

“I want to thank the University of Wisconsin Oshkosh administration for giving me the opportunity to be the school’s head football coach the past 15 years,” Cerroni said. “It has been an absolute honor to work here and represent this University. I’m excited about the new challenges that lay ahead. Although I am no longer the head football coach, I will spend the rest of my time making the UW Oshkosh athletics program the best it can be.”

“All of us in the UW Oshkosh community are very grateful for Pat’s contributions,” Sims said. “Pat has galvanized our fanbase with his accomplishments and helped our football program gain respect throughout the nation. In addition, Pat has mentored young men and led them to success on the field, in the classroom and in life, while serving as a great ambassador for our university. I know the entire Titan Nation joins me in wishing Pat the best in his retirement. He is indeed a true Titan!”

Editor’s Note: This story was updated to include information reported by the Oshkosh Examiner and Sims’ rebuttal.