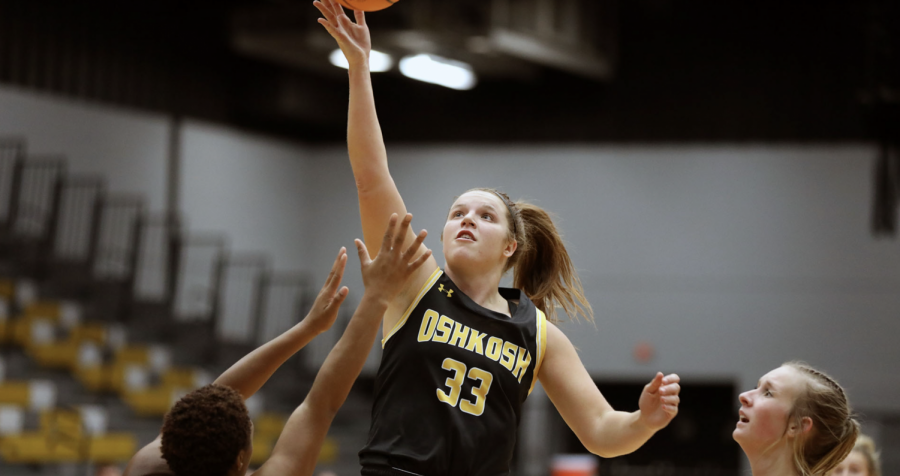 Courtesy of UWO Athletics Senior Nikki Arneson goes for a layup against Alma College. Due to the efforts of her and teammates UWO Women’s basketball stands at a 6-1 record.

Senior forward Nikki Arneson put up a team-high 53 points during the three-game stretch while shooting 10-for-12 from behind the three-point line.

UWO traveled to Edgewood College on Nov. 17 and took down their opponents convincingly 78-46. Arneson led the way in the scoring category with 22 points on a 7-for-9 shooting effort, and senior guards Abby Kaiser and Leah Porath led the tram’s rebounding effort with eight a piece.

Arneson said the recent success has been due to the team’s ability to expose favorable matchups against their opponents, and she also said that the defensive effort has made playing on offense a lot easier.

“Some main keys to some of our recent wins are that we are playing to each other’s strengths and realizing more where our mismatches are on offense,” Arneson said. “I also think our defense is really stepping up. If our defense is clicking on all cylinders our offense tends to follow.”

The Titans made quick work of St. Norbert by beating them 71-40 in a game where they came out firing to a 27-9 lead after just one quarter.

Porath led the scoring effort with 15 points on a 6-for-10 shooting effort, and she was closely followed by sophomore guard Kennedy Osterman, who scored 14 points and shot 4-for-5 from beyond the arc.

Porath put up 40 points of her own during the three-game stretch, and her 85% success rate from the free-throw line this season is the best of her career thus far.

Porath, who is second on the team in steals (1.3 per game) behind Abby Kaiser (2.6 per game), said the defensive intensity has greatly helped the team’s ability to set up plays on offense as opposed to rushing shots on every possession.

“We are focusing more on being disciplined,” Porath said. “Being better on the defensive end of the court is also helping us offensively. We aren’t rushing offensively as much because there isn’t as much pressure to score if we are getting stops on the other end.”

Junior forward Kendal Schramek said the team’s ability to spread the ball around has paid off during the team’s 6-1 start to the season.

Vaile, who is shooting 57% from beyond the arc on the season, said the team chemistry has improved throughout the year, and these blowout wins have been happening as a result.

She also said that knowing each player’s strengths has helped the team get off to such a strong start.

“We have been playing as a team and that has helped us improve game to game,” Vaile said. “As we continue to grow as a team we will just keep getting better at playing with each other and knowing each other’s strengths.”

With all Wisconsin Intercollegiate Athletic Conference (WIAC) teams other than UW-Stout (2-3) having a winning record, Arneson said she expects every team to give the Titans a hard-fought game. She also said the Titans must bring their all to be able to compete and win the conference as they have in the last three seasons.

“The WIAC is one of the best conferences in the nation, so every night is going to be a battle,” she said. “Any team can beat anyone on any given night so it will be important that we bring our best basketball with us wherever we go.”
Porath said she understands that the team will have a target on its back and needs to be prepared to go all out in every conference game. She also said that the team that gives their all and wants to win more will come out on top in these competitive conference games.

“I expect nothing but every team’s best effort. We are a team that people want to beat, and we always seem to get everyone’s best game every year,” she said. “Ultimately, it comes down to who wants it more and is willing to put in the work.”

UWO took on UW-Eau Claire (6-0) in Eau Claire Wednesday, and the results can be found on the UWO athletics page. The Titans will take on UW-La Crosse (6-2) at home on Saturday in their first home conference game of the year.

Schramek said the team’s intensity must stay at a high level throughout the season and that this team wants to leave it all on the court.

“Our energy and efficiency must continue to thrive throughout the season,” she said. “There are eight seniors that want to get the most out of the season. We are all playing with an edge. No regrets.”