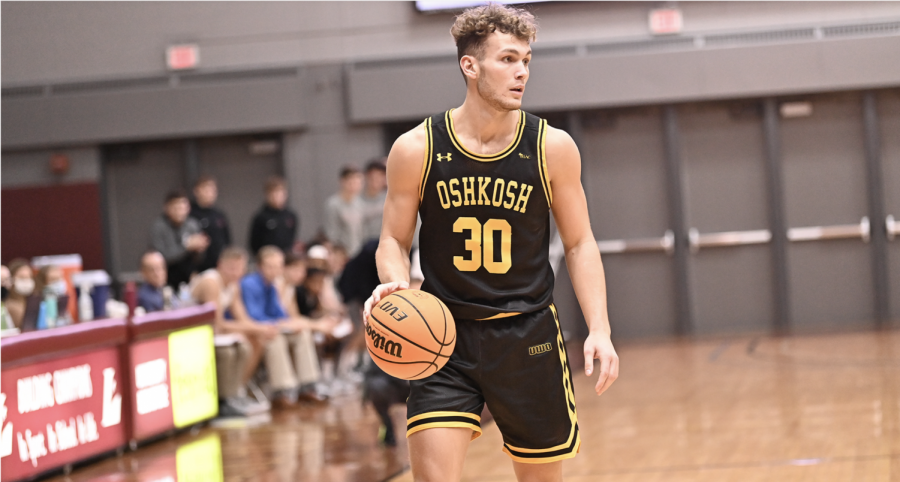 UWO took an early 12-4 lead, but UWEC responded by knocking down a few threes, and cutting the lead to 16-12 with 14 minutes left in the first half. After a Blugold timeout, UWEC proceeded to turn the ball over on three straight possessions, but UWO was not able to take advantage and pull away.

But, late in the first half, UWO began to pull away. UWEC would go cold in the last five minutes of the half as the Titans opened up a 33-24 lead going into halftime. It would be UWO’s turn to go dry in the early stages of the second half, and the Titan lead was cut to three.

Plamann began to get things going from beyond the arc to put the lead back to 12. Throughout the second half, the Blugolds tried to make a few runs at the UWO lead, but the Titans always responded with a bucket of their own.

In the late stages of the game, the Titans were money on their free throws to close out the game 69-60. UW-Oshkosh was never behind throughout the entire game. The win extended the Titans’ home winning streak to 10 at the Kolf Sports Center. The Titans have not lost at home since Feb. 5, 2020 when they lost 78-76 against UWEC. UWO has now won six of the last seven meetings against the Blugolds.

UWO was 42.9% from the field in the win as forward Levi Borchert had his fifth double-double of the year, scoring 16 points and grabbing 13 rebounds to go with two steals and two assists. Other Titans in double figures were Eddie Muench and Quinn Steckbauer who had 12 and 10 points, respectively. The six turnovers in the game are the fewest for UWO since Dec. 29, 2019, against Emory University (Ga.).

UWEC was led by Michael Casper who had 18 points, three rebounds and an assist. David Ijadimbola had 15 points, two rebounds and two assists to go along with a steal for the Blugolds. UWEC shot 42.6% from the field, but had 14 turnovers.

Senior guard Muench said:, “It was a big game and it’s always good to get a win against a quality opponent. [I’m] excited for the next game on Saturday (Dec. 4).”

UWO would win again on Dec. 4 against eighth-ranked UWL 56-53. Borchert led the team with 15 points and seven rebounds as the Titans extended their winning streak to five games. The win was also the fourth in the past five meetings for UWO. The 109 total points were the lowest in the last 34 games of the series.

After falling behind early, UWO closed out the first half on an 11-2 run after UWL went 1-8 from the floor over the final five minutes. The low-scoring first half finished 28-22 UWO, with the Titans shooting just 29.4% from the field, while the Eagles shot 32.1%. The second half was back and forth, as UWL reclaimed the lead four times early in the second half and built a 41-36 lead with 10:39 to go in the game.

But Oshkosh would take the lead for good with 4 minutes to go after a Borchert fast break layup to put the Titans up 47-46. Plamann would nail a three-pointer as the shot clock expired on UWO’s next possession to increase the lead to 50-46. A free throw from UWL’s Sean Suchomel would cut the lead to 52-49 with 20 seconds to go.

Plamann would miss his one-and-one attempt at the other end, and the WIAC’s leading scorer Ethan Anderson would hit a jumper to put the score at 52-51 with just nine seconds to go. UWO sophomore guard Cole Booth hit two clutch free throws to put the Titans up three, 54-51 with seven seconds to go. The Titans decided to foul Suchomel to prevent a three-point attempt, sending him to the line where he would put the score at 54-53 UWO. However, the Titans would go back up 56-53 after Jonah Rindfleisch converted his free throw attempts with 3.7 seconds remaining. UWL’s Suchomel threw up a 40-foot shot at the buzzer that went off the rim, as the Titans hung on to win 53-56.

UWO freshman forward Connor Jenkins said:  “It was a very big game going into it and we knew we were going to have to play well to win. Our defense did a great job taking away La Crosse’s strengths and held them to a very low score that was good enough for us to win. They are a very good team, but getting the win on the road was huge in December.”

UWO, now No. 6in the d3hoops.com top 25 rankings, will look to continue their winning streak when they play North Central College in a non-conference game on Dec. 11 at the Kolf Sports Center.