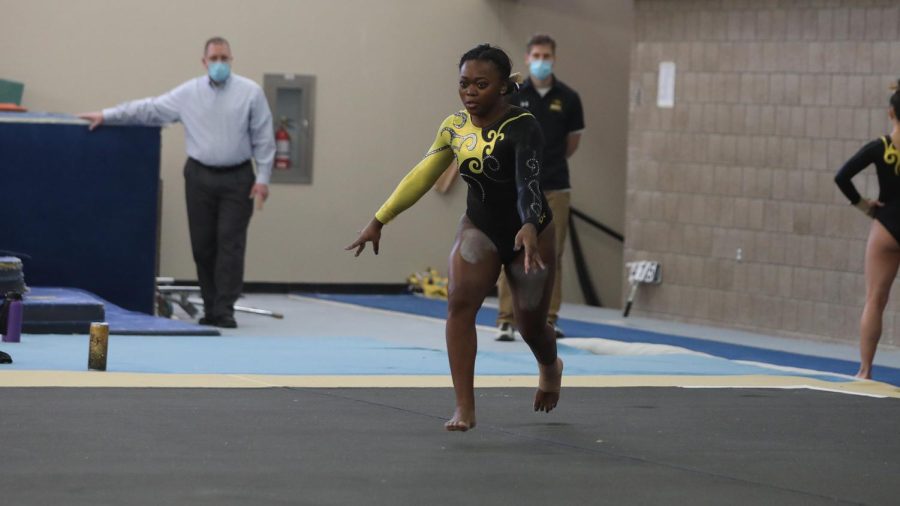 Three Titans won events as the nationally ranked UW Oshkosh gymnastics team defeated Gustavus Adolphus College 188.00-182.40 on Saturday in Saint Peter, Minnesota, to remain undefeated.
UWO, ranked second in Division III by RoadToNationals.com, took first place in the balance beam, uneven parallel bars and the floor exercise. The ninth ranked Gusties won the vault and all-around competitions.
“”I feel like this meet was just getting us ready for [the] conference [meet] this weekend,” sophomore Emily Buffington said. “Every win is a win for us but I think it was more of preparing ourselves and getting more practice in before conference.”
Oshkosh swept the top three spots in the vault, with Buffington finishing first, earning a 9.70 score from the judges. Junior Trinity Sawyer and senior Emily Gilot tied for second with a score of 9.60. But the Gusties would take spots four through nine in the vault, narrowly winning the event 47.475-47.475.

“I think that we definitely improved on vault this week,” Buffington said. “I mean I personally feel like I improved on my vault. We still have room to improve.”
In the uneven bars, GAC’s Sophia Redding took the top spot in the event with a score of 9.45. Once again two Titans tied for second, with Sawyer and Samantha Zeilinger both receiving a 9.40 from the judges. UWO took five of the top six spots to beat the Gusties 46.60-44.10 in the event.
Senior Kaira Hammond earned a score of 9.600 on the balance beam to push the Titans past GAC 47.275-46.575 in the event. Oshkosh’s Delaney Cienkus and Liz Romano both earned a 9.55 to tie for second. Anna Zoromski followed up with a fourth-place finish on the balance beam for UWO, receiving a score of 9.50.
“Normally [our routines are] the same week to week unless there is something that is hurting and needs to be changed, but normally it’s the same,” Buffington said.
UWO took the top four spots in the floor exercise as they beat the Gusties in the event 47.475-46.575. Kennedy Springer took home the top spot in the event by earning a 9.750 for her routine. Rahdea Jarvis received a 9.725 and Buffington received a 9.70 to take second and third, respectively, for Oshkosh. Sawyer came in fourth with a score of 9.675.
The Gusties won the all-around event, but it was only because the Titans did not have a participant. Brooke Merila, the lone GAC competitor, received a score of 36.10 from the judges.
Buffington commented on why the judges gave lower scores than last week.
“All judges are different, these judges were a little bit tougher on us than our home judges last weekend, so it just depends on where we go,” Buffington said.
UWO will compete in the Wisconsin Intercollegiate Athletic Conference Championship this Saturday in Whitewater. The meet is also the National Collegiate Gymnastics Association West Regional.
“I think we are going to do really well,” Buffington said. “I think if we go out there like how we did at our home meet, we can end up first.”