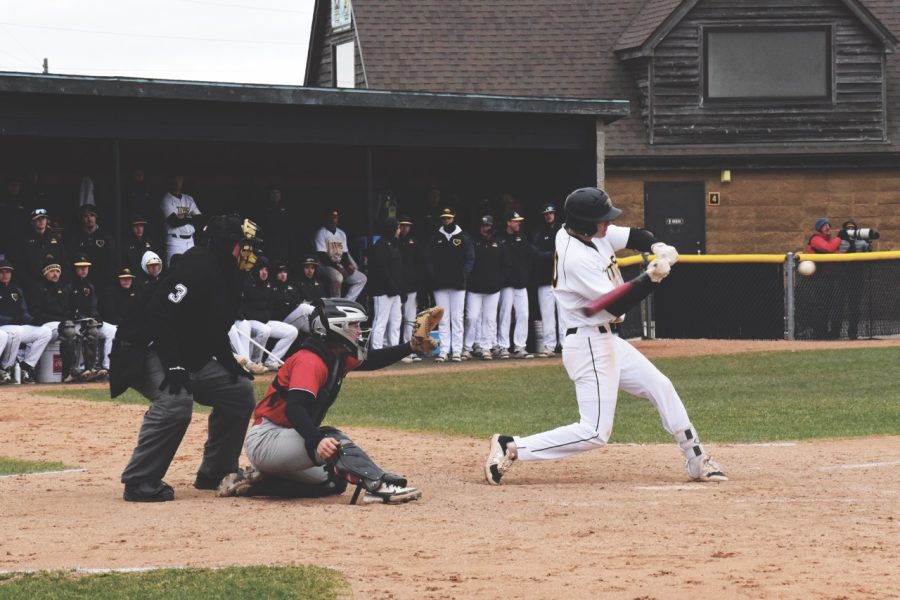 The UW Oshkosh baseball team stretched its win streak to nine games after they defeated Ripon College Tuesday and swept UW-Platteville in a doubleheader last weekend at Tiedemann Field.

“We came out hot, they were must win games, and we were looking forward to beating them,” Zach Taylor said. “They brought the heat, which motivated us to hit back and we performed really well.”

Tuesday, the Titans defeated Ripon 8-3 at Tiedemann Field to continue their win streak. Taylor hit two home runs in the game to put Oshkosh on top after they fell down early. UWO built a five-run lead and never looked back in the comfortable win.

Taylor said he’s been working on swinging harder to drive the ball.
“I have been watching highlights of Javier Baez, and he always swings hard, so that’s something I have been trying to do,” he said. “I’m always hunting for fastballs, and I look to make pitchers pay when they do throw one.”

Saturday’s doubleheader had to be rescheduled for Sunday in Oshkosh after field conditions at Kendall Murray Field in Platteville were determined to be unplayable. The Pioneers were the home team in both games of Sunday’s Wisconsin Intercollegiate Athletic Conference (WIAC) doubleheader.

Taylor said the team started out slow in the regular season but is now making a run to the top.
“We faced a lot of good competition in the beginning of the season, but we found our groove and started to hit the ball really well,” he said. “Now we are just a few games back from first place in the WIAC.”

The Titans, who have not lost at Tiedemann Field against Platteville since 2009, fell behind early in the first game of the doubleheader, but they scored six runs in three innings to win 6-4. In the fifth inning, Matt Scherrman hit a two RBI double to left-center field to pull UWO ahead 4-2. Platteville (10-13, 8-8 WIAC) responded in the bottom of the fifth with a two-run home run from Ross Krist to even the score.

Oshkosh pulled ahead for good after Jake Andersen singled to left field, scoring Nicholas Shiu and advancing Ethan Schreier to third base. Schreier scored on a Pioneer fielding error as UWO took the 6-4 lead. Shiu went 5-5 in the game, one hit shy of tying the school and WIAC record. Will Michalski won his fourth game of the season for UWO, and Connor Brinkman recorded his second save of the season.

In the second game of Sunday’s doubleheader, Oshkosh was held scoreless for five innings before exploding for 11 runs in the seventh inning to force the NCAA’s 10-run-rule into effect. Neither team scored a run until the sixth inning, when Jake Surane hit a home run to left field in windy conditions at Tiedemann Field. Surane nearly hit for the cycle, hitting a single, double and home run in the game.

Surane said he was looking to hit the ball into the gaps and it worked out.
“I was just selective with the pitches I got, and I looked to drive the ball,” he said. “I feel like I’m always a tough out at the plate.”

In the seventh inning, UWO forced four UWP errors en route to increasing their lead to 12-0. Eric Modaff, who stole a base in seventh, and Schreier both had two RBIs in the inning. The Pioneers scored two runs in the bottom half of the seventh inning, but it was not enough to prevent the game from ending in seven innings 12-2. Harry Orth recorded his sixth win of the season, striking out 10 batters and allowing two earned runs.

Taylor said the team got hits when they needed them, which was key to sweeping Platteville.
“Our pitching has been lights out, and we have been hitting baseball hard,” he said. “We have been getting guys on base, and that leads to more runs getting scored.”

Oshkosh will take on UW-La Crosse (14-13, 9-9 WIAC) Saturday and Sunday in back-to-back WIAC doubleheaders at Copeland Park in La Crosse.