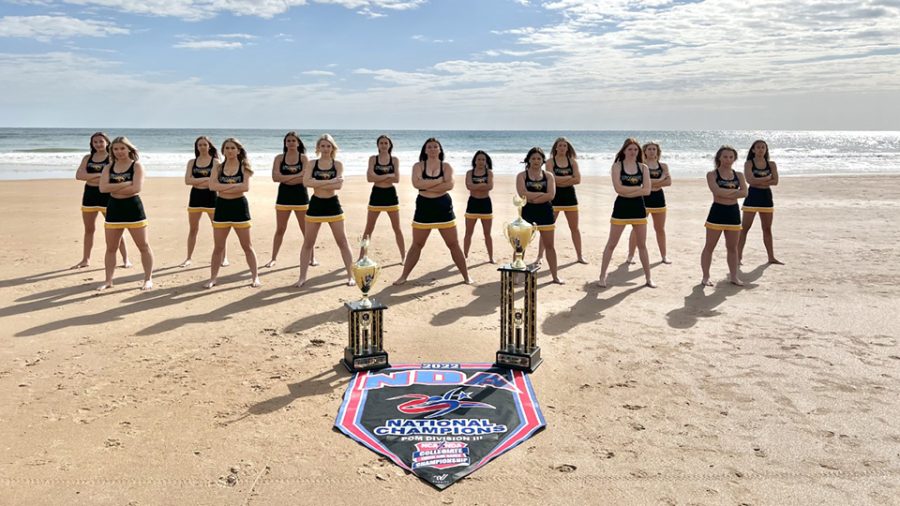 Courtesy of UW Oshkosh Today The UWO dance team poses together on Daytona Beach, Florida. This was the team’s first national championship, and they took first in Poms and third in Jazz.

“When they announced the second place team, we knew we were now national champions. When our name was announced, we jumped up and everyone was crying and hugging our teammates because at that moment, we knew it all paid off.”

The UWO’s season started in August and ended in April. The girls practice three times a week adding more time as they get closer to performances at basketball games and local competitions. At the end of their season, they get on a plane and head down to Daytona, Florida for nationals.

At nationals, the UWODT competes against over 200 other teams in a battle to become national champions.

In 2019, they took home second place in Pom DII and seventh in Jazz DII. Just before nationals in 2020, the COVID-19 pandemic caused a nationwide shutdown, and the team was no longer able to attend. 2021 ended in a similar fashion, and finally getting to attend in 2022 was a dream come true.

Jenna Riche is a senior special and elementary education major on the UWODT. She’s been dancing since elementary school and has been a member of the team since her freshman year.

“I’ve been to nationals one time, 2019,” she said.” I remember feeling overwhelmed in the best way possible. I had no clue what to expect, but being under the lights with so many judges and spectators felt amazing. Our leaders had led us through the event and helped us to learn the ropes.”

Riche said that there was something that made this season feel special.

Riche said the time leading up to the competition was nerve wracking.

“Having spring break just a week or so before made for a big break,” she said. “The dancers had time off which was scary, but every dancer came back determined and ready to fight and that fight didn’t stop until the moment we stopped dancing.”

She said walking into the venue made her feel like she was in a movie.

“There are cheer and dance teams everywhere marking routines and throwing stunts. Teams are playing music everywhere you go, and every team looks ready to fight,” Riche said. “The competition room is dark with tons of lights, and you can feel the fight in that room. We were ready to fight.”

That fight paid off for the team this year.

“Waiting for awards was definitely intense, but I was eager to hear the results. I could feel my heart racing, but being around my teammates and squeezing their hands made everything feel amazing. They made it all worth it.”