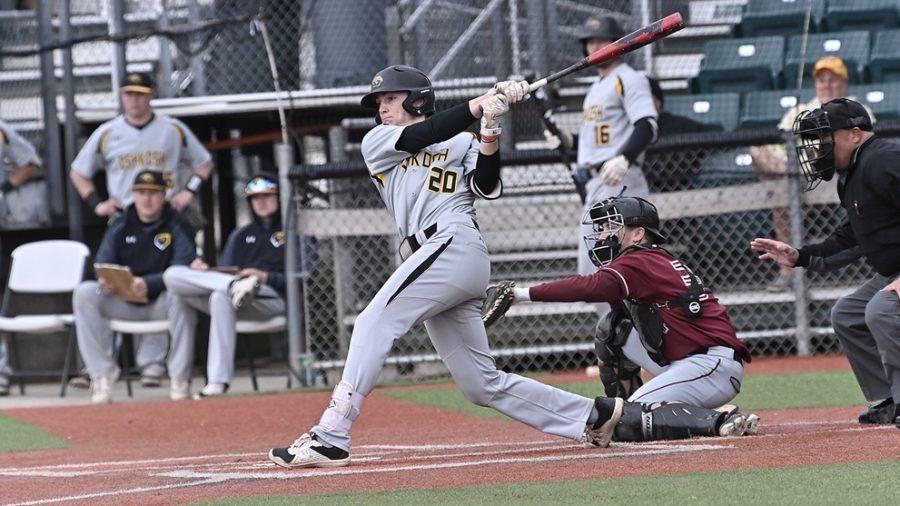 The UW Oshkosh baseball team’s nine-game winning streak came to an end as the Titans dropped their weekend series against UW-La Crosse at Copeland Park in La Crosse.

“La Crosse is a really solid team with some really good bats,” UWO first baseman Zach Taylor said. “They came out swinging and for the most part we were right there with them. They just got an extra hit or two when they really needed it.”

In the lone UWO win the Titans (20-13, 14-8 WIAC) fell behind early but scored four runs in the final five innings to win 4-2 in the second game of Sunday’s doubleheader. In the top of the fifth inning, Jake Andersen hit a two-run home run to tie the game at 2-2. Two innings later, Mason Kirchberg smashed a two-run homer as the Titans took the 4-2 lead and never looked back. Will Michalski pitched a complete game for UWO, improving to 5-0 on the season.

In the first game of Sunday’s doubleheader, the two teams were tied at 10 until the bottom of the seventh inning when the Eagles (20-14, 14-10 WIAC) scored three runs, eventually winning the game 13-10. Nicholas Shiu opened the scoring in the game, hitting a three-run homer, the first home run of his career. UWO tacked on four more runs in the next two innings to take the 7-0 lead. UWL responded by scoring 10 runs in three innings to pull ahead 10-7. The Titans would tie the game in the top of the seventh but could not stop the Eagles offense as UWL ended UWO’s nine game win streak.

Oshkosh fell to UWL in the first game of Monday’s doubleheader 7-6 despite the Eagles committing four errors in the game. The Titans, who left 10 runners on base in the game, jumped out to a 2-0 lead until UWL scored three unearned runs in the fourth inning to capture the lead. In the fifth inning, Shiu hit a three-run homer, his second of the series, as Oshkosh retook a 5-3 lead. Jack Olver responded for UWL in the bottom of the fifth inning with a solo shot to cut the Titan lead to one. UWO scored a run in the sixth, but it was not enough as UWL scored three runs in the eighth inning to go on to win 7-6.

The Titans were shut out in the series finale Monday night, losing to La Crosse 5-0. Oshkosh left 11 runners on base in the game and was outhit by the Eagles 14-8. UWL opened the scoring in the second inning with a sacrifice fly from Connor Roesler and added another run in the fourth inning from a Tim Urlaub RBI single. La Crosse scored three runs in the sixth inning and Brady Schmitt fanned 10 UWO batters as the Eagles cruised to victory.

Taylor said that the Titans were making solid contact during the series, but the team just hit balls right at La Crosse fielders.

“They had solid pitching and didn’t make many defensive mistakes,” Taylor said.

Taylor also said the team was a little down after the series over the weekend.

“Collectively we get very involved in the games and we always want to win,” Taylor said. “When we suffer a couple of tough losses like we did the mood is always a little gloomy.”

UWO still sits alone in third place in the WIAC with four games remaining before the WIAC tournament that starts on May 12.

The Titans will take on the second-place UW-Stevens Point Pointers (27-6, 18-5 WIAC) in back-to-back WIAC doubleheaders Friday and Saturday at Tiedemann Field at Alumni Stadium.