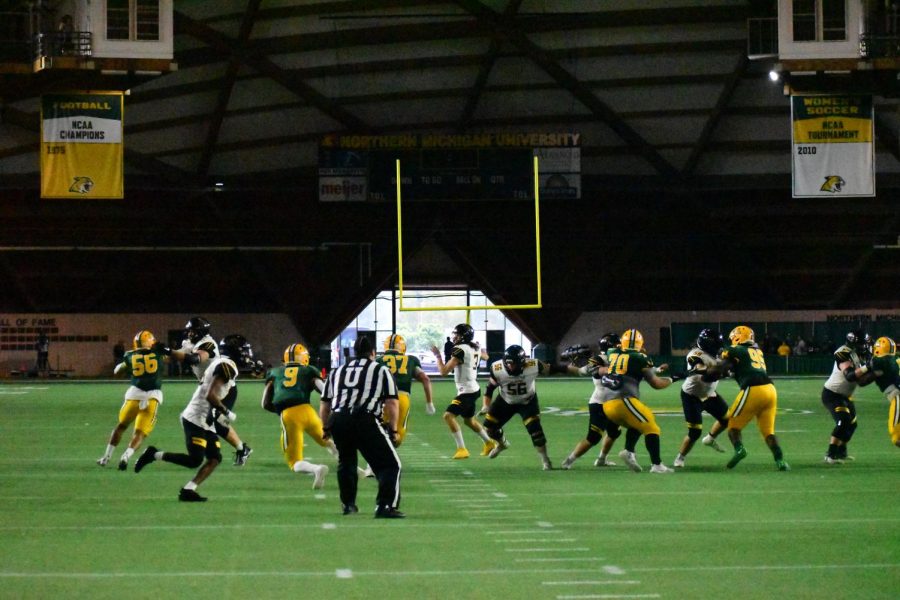 After falling down 10-0, UWO clawed their way back to level terms but NMU scored the only points of the fourth quarter from a Daniel Riser field goal as the Wildcats held on to win the game.

Following the loss, the Titans moved up to 16th in the nation according to d3football.com’s Top 25 Poll.

“It was a really cool experience to play in a dome,” he said. “I think our guys rose to the challenge playing against a scholarship school and did some really good things.”

On the first possession of the game, NMU drove down the field and Riser kicked a 42-yard field goal as the Wildcats took the opening 3-0 lead. The Titans put together a drive of their own that was cut short when NMU stuffed UWO quarterback Kobe Berghammer on a fourth and one at the Wildcat’s five-yard line.

After the Titan defense forced a three and out to start the second quarter, UWO marched into the red zone but could not come away with points once again as kicker Nolan Mobley missed a 27-yard field goal. Just four plays later, NMU increased their advantage to 10-0 after quarterback Zach Keen found Kenyon’Ta Skinner for the 43-yard passing touchdown.

After the game, Jennings said  the team needs to finish in the red zone.

“We went 2-5 in the red zone and when the ball is at the five-yard line, that’s inexcusable,” he said. “We also have to get off the ball faster on the defensive side of the ball and our kicking game has to be the best in the country.”

UWO finally put points on the board with just under four minutes to play in the first half when Mobley connected on a 21-yard field goal. NMU came within striking distance right before halftime, but UWO defensive end Buddy Barnett forced a crucial fumble at the Titan 33-yard line as the half ended 10-3.

The Titans tied the game at 10 in the third quarter when Berghammer found a wide-open Toney Steger in the endzone for the 11-yard touchdown. On the following possession, the Wildcats had an eight-minute drive that ended with another Riser field goal as NMU retook the lead early in the fourth quarter.

Nearly the entire fourth quarter had to be played without a working scoreboard, which went black at the end of the third. The head referee was in charge of keeping time with his watch, which left both coaches unable to tell exactly how much time was left.

Oshkosh put together a 66-yard drive on its next possession but could not capitalize as Mobley missed his second field goal of the game, this time from 27-yards. NMU had kicking troubles on their next drive as Riser missed a 50-yard field goal to keep the Wildcat lead at just three.

With under three minutes to play in the game and the Titans driving down the field, Berghammer threw his first interception of the season, putting the game to bed.

Jennings said the biggest difference from the previous game was that last week when a play was there to be made, his players were able to make the play

“This week, the ball might have been a little off our fingertips, a little behind us or we just don’t quite get there,” Jennings said. “And that’s what happens when you swing up like we did playing against a really good Northern Michigan team, the margin for error gets a little bit smaller”

Berghammer passed for a game high 260 yards, with one touchdown and one interception. Running back Peter MacCudden led all Titan rushers with just 30 yards while wide receiver Trae Tetzlaff led UWO receivers with six catches for 103 yards. The Wildcats dominated the running game, outrushing UWO 149-66.

On the defensive side of the ball, linebacker Tory Jandrin led the Titans with 11 tackles and Jacob Mandella had the lone UWO sack.

The Titans will journey to Jackson, Mississippi, where they will take on Millsaps College on Saturday at 1 p.m.