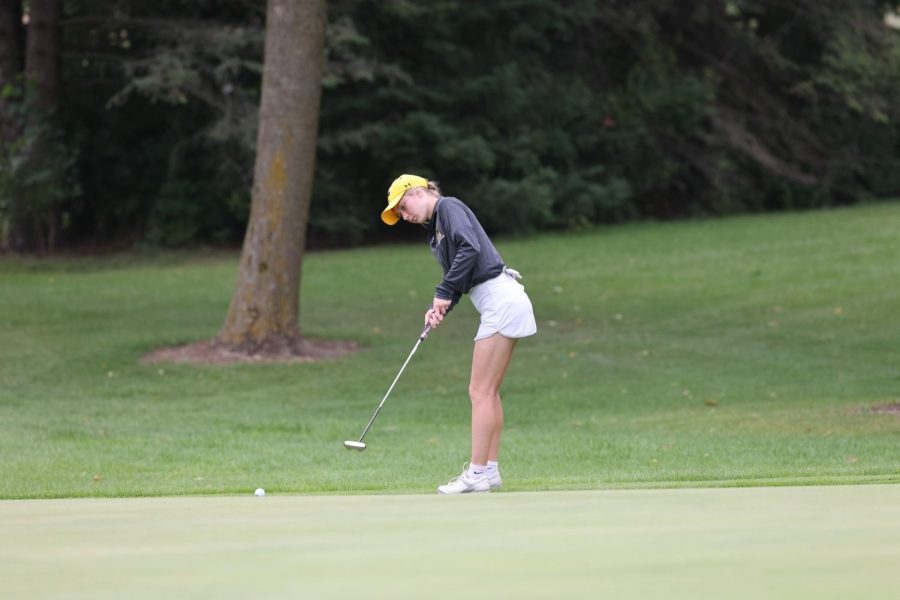 The Titans played a two-round sequence for the Marian University invitational on Friday and Saturday. UWO posted a cumulative score of +198 over two rounds with Kylie Herrin leading the way at +41 to come in fifth out of 11 teams.

The team then traveled to Eau Claire Golf & Country Club for the Blugold Invitational for rounds on Saturday and Sunday. The Titans posted a score of +117 and were led by Ava Downie, who shot +24 and earned a tie for ninth overall in the event.

UWO freshman golfer Sophia Steel, who made her Titan golfing debut this past weekend and shot +59 in a pair of rounds, said the team wasn’t satisfied with the most recent results. She also said the pace of play made it hard to get into a rhythm.

“I don’t think the team was extremely happy with their scores, even my own,” Steele said. “We had to wait around 10 minutes in between each hole. Once I got into my groove, I wanted to keep the pace going, but it just continued to get thrown off.”

As the weekend progressed, weather elements began to impact the level of competition and tested a lot of golfers’ mental and physical game.

Steel said the experience, while tough, should help the team grow in the matches going forward. “Day two it was windy, rainy and cold, so that was a struggle almost the entire round,” she said. “With many tee shots on this course, I had to lay up on my shots to be able to then hit it over the water. Although we all didn’t put out all the scores we may have wanted, I took it as a learning tool for the weekends to come.”

Before last week’s rain-filled performance, the Titans kicked off their season by hosting, and winning, the annual Titan Classic at Mascoutin Golf Club. Oshkosh finished at +119 after two rounds to win their opening meet of the 2022 fall campaign.

Downie led the weekend for UWO with a +22 score in two rounds that landed her in a tie for second place individually in the meet.

Steel said the Titan Classic was a pleasant way to tee off the season, and the skill-based pairings, along with loved ones being able to attend, made for an enjoyable weekend.

“There was a very friendly competitive atmosphere for the Titan Classic,” Steel said. “Most players got paired with players who were in their same general skill level…many players on the team also had friends and family attend our opening invite so it was fun meeting new faces.”

Steel, an Illinois native, is one of four freshmen competing in the UWO’s 11-golfer rotation this season.

She said her main reason for playing golf at the collegiate level is to feed her passion for competition and growth, and juggling her academic and athletic career will help her achieve just that.

“I chose to continue to play a college sport because I knew it would be challenging,” she said. “I love to challenge and hold myself accountable, and I knew this would be the first step towards that.”

When it comes to expectations for the upcoming season, Steel said consistency is her main focus, and that by polishing mechanics and building self trust, she can improve as a golfer.

“When your swing becomes consistent, then that brings confidence,” Steel said. “I want to continue to grow and stay confident with every shot I make on the course, and with that I know [lower scores will come].”

UWO finished in seventh place out of eight schools in the Wisconsin Intercollegiate Athletic Conference (WIAC) in the spring 2022 season. The team will have the D-III Classic (Sept. 17-18) and the UW-Stevens Point Invitational (Oct. 1-2) to use as building blocks before gearing up for the fall 2022 WIAC championship from Oct. 7-9.