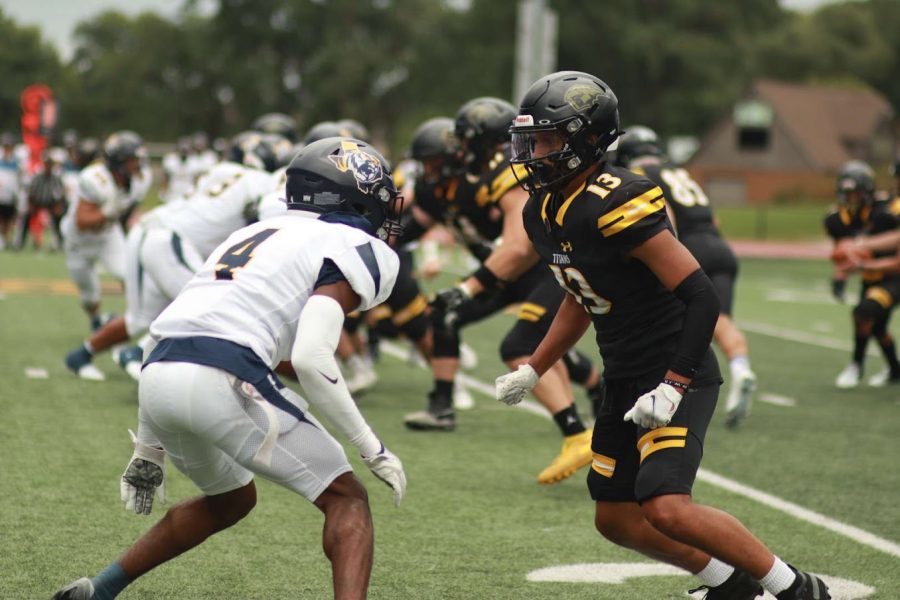 With UWO’s first-ever win in Mississippi, the Titans moved up one spot to No. 15 in the d3football.com Top 25 poll.

Wide receiver Terrell Carey said the offense was so explosive because of the way they practice.

UWO kicked off the scoring on their first possession, taking an 8-0 lead after a DJ Stewart 1-yard run. The Titans capped off the drive with a successful swinging gate trick play on the extra point attempt by Jimmy Duval, who ran into the endzone untouched.

On the first play of Millsap’s first drive of the game, quarterback Brody Davis threw an interception to Jared Tenpas, who returned it to the 4-yard line, giving the Titans prime field position. Berghammer found Duval in the endzone on the next play, but the Titans were unable to convert the trick play on the point after attempt, keeping the score at 14-0.

After a missed field goal attempt by the Majors, UWO marched down the field and scored yet again, this time a 1-yard Berghammer run. The Titans later increased their advantage to 27-0 in the second quarter when Berghammer found a wide-open Terrell Carey for the touchdown, but kicker Nolan Mobley missed the extra point.

The Titans continued their total domination of Millsaps in the second half when Berghammer added another rushing touchdown, this time a 3-yard score, to bring the lead to 34-0. The Majors finally added points to the board on the next possession when Ethan Klapatch connected on a 30-yard field goal.

After a UWO muffed punt, the Majors drove down the field to score the final touchdown of the game with a Melvindrick Johnson four-yard run as the game finished 41-17.

Carey led all Titan receivers with four receptions for 91 yards and a touchdown while senior running back Peter MacCudden had a game high 63 yards on four carries. Berghammer, who was last week’s Wisconsin Intercollegiate Athletic Conference (WIAC) player of the week, is now tied for 10th place in all-time UWO rushing touchdowns with 17 after his masterful five total touchdown performance.

Carey said it was a great feeling to get back on the field and make an impact in the game.

Carey said the team came together after the tough loss to Northern Michigan University last week.

“I got to see the team get closer in terms of relationships and is just one of those things where being able to see players come in and come together was just a humbling experience,” he said. “We made mistakes and didn’t just learn from them but capitalized on those mistakes this week.”

UWO will have a bye week this week before playing UW-Platteville to kick off the WIAC season on Oct. 1, at J.J. Keller Field at Titan Stadium for Hall of Fame Day.

Carey said the team is going into this bye week not as a rest week, but as a week to get better.

“We’re trying to utilize this bye week by focusing on getting better just like we do in any other week by taking it day by day and looking for things to improve.”