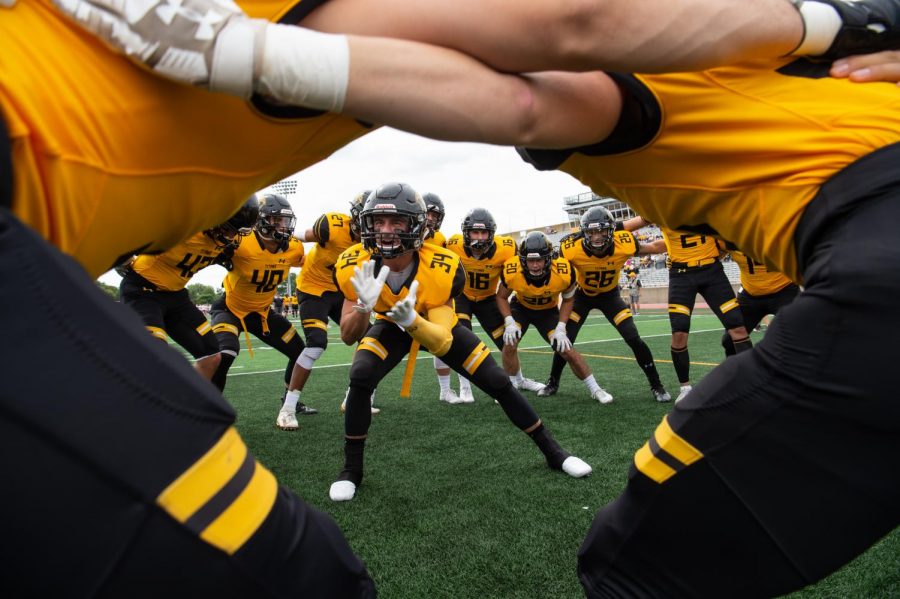 Junior Anthony D’Orazio gets the Titans riled up before their home opener last week against Carthage College. This week the Titans traveled to Maryland and fell to Salisbury University 24-19.

The UW Oshkosh football team traveled to Maryland over the weekend where they dropped a non conference game against Salisbury University, 24-19.

Head coach Patrick Cerroni knows that these non conference games are used to work out any kinks on the offense and defensive end.

He expressed that its a period of figuring themselves out, finding out what their strengths are and working to immediately address their weaknesses.

“We made a ton of mistakes that we are trying to correct, but who cares it’s a new week; it’s an option team, and there is a lot of discipline involved and a constant effort to improve,” Cerroni said.

Although last week Cerroni praised his defense for their play against Carthage College, he knew it would be no easy task against Salisbury this week.

The defense held up for the most part, only allowing 265 yards of offense. What killed the Titans was Salisbury’s ground attack, as they rushed for 214 yards.

The Sea Gull’s also won the time of possession battle. Salisbury possessed the ball for 34.45 minutes, whereas the Titans only held the ball for 25:15 minutes.

While the scoreboard may not reflect it, the Titans racked up more yardage than Salisbury with 421 yards of total offense.

Freshman quarterback Kobe Berghammer had more offensive opportunities in a 24-19 loss against Salisbury this Saturday than he did in week one.

Berghammer completed 45% of his passes, going 15 for 33, throwing for 290 yards and two touchdowns in the game against Salisbury, distributing the ball to eight different Titan receivers.

Cerroni said he doesn’t care about stats as long as they are winning games.

“When the ball is distributed around, that is when we are going to win games,” Cerroni said. “I don’t care if 10 guys carry the ball and 10 guys catch the ball. As long as we got guys who are working hard every week.”

That is just what the Titans did as they won in total yards with 421 versus Salisbury’s 265. The Titans were dismantled on the rushing end as 214 of Salisbury’s yards came from the run game.

Cerroni said he was aware of Salisbury’s talent before the game on Saturday.

“They are a really good football team, Cerroni said. “They have pretty good receivers for being an option team.”

Although the Titans lost, they scored all 19 points came in the fourth quarter to tighten the gap.

The scoring was highlighted by a 66-yard run by senior Riley Kallas, a 49-yard touchdown pass by Berghammer to junior Justin Kasuboski and a 36-yard receiving touchdown by junior Ryan Hayes.

Berghammer said the team’s focus is simple: they have to win games.

“I just want to win games,” Berghammer said. “This is a great team, and we all want to focus on improving and getting wins from week to week.”

The UW Oshkosh Titans fell to 1-1, but there is one more non conference game against Huntingdon College, which will give the Titans one more week to work on what needs to get done before conference play starts.