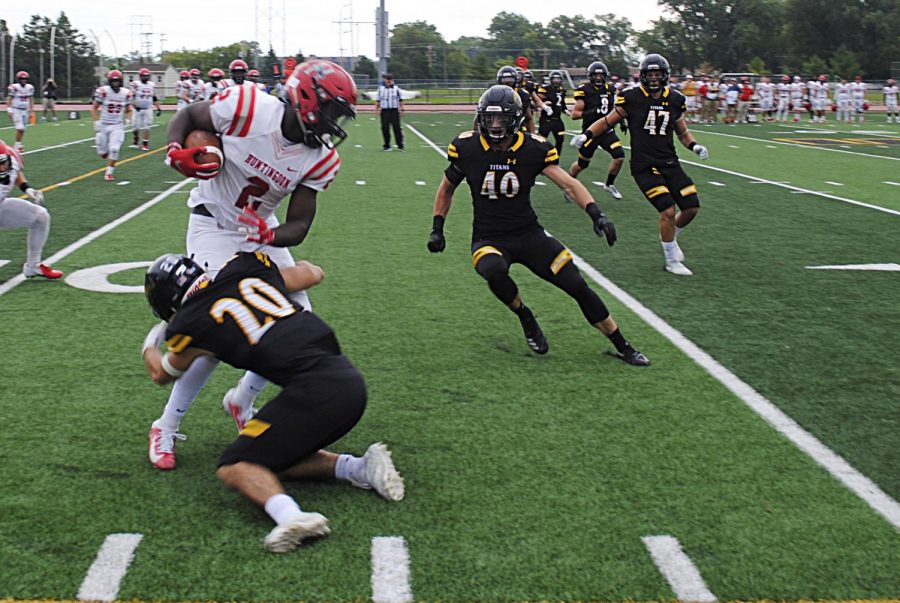 The UW Oshkosh football team dismantled Huntingdon College (Ala.) on Saturday by a score of 44-14.

Freshman quarterback Kobe Berghammer had a near perfect showing in his first career start as he went 20-22 with 223 yards and three touchdowns through the air. He also ran the ball 15 times for 49 yards and a score.

After a back and forth defensive battle in the first quarter, the Titans blocked a Huntingdon punt that led to a safety and gave the Titans a 2-0 lead with 4:50 to play in the quarter.

UWO exploded in the second quarter with four touchdowns. Junior Chris Hess and sophomore Joe Franks ran for touchdowns, and Berghammer passed for two more in the frame.

The Titans took a 30-0 lead heading into half time and head coach Pat Cerroni said his quarterback played very well, especially for his first start.

“It’s not how we planned it,” Cerroni said. “You’d like to see a kid like that grow into the position. Obviously, he’s a great player. Kobe has done everything we’ve asked of him. He won the spot so we’re just going to go with it now.”

Cerroni went on to say there are some teachable moments when Berghammer is on the field but he ultimately makes plays.
“You can see [he creates things on the field],” Cerroni said. “There’s a lot of growing pains that we’re going through. He’s like a young puppy out hunting for the first time. He’ll be running around like a chicken with his head cut off, but I’m happy for him.”

Huntingdon finally got on the board at the eight-minute mark with a passing touchdown from quarterback Michael Lambert.
The Titans went on to win the game 44-14, pushing their record to 2-1 heading into the bye week.

Berghammer was awarded the Kwik Trip Wisconsin Intercollegiate Athletic Conference Athlete of the Week for his career game.

UWO currently ranks first in the WIAC in total and passing defense, and Cerroni said his team was able to hold Huntingdon to 86 passing yards because it allowed the Hawks to run the ball.

“We let them run the ball,” Cerroni said. “If you’re running the ball successfully, you tend not to pass it as much. They are a good offense. They’re used to scoring 40 points a game. [Our] defense played extremely well.”

Heading into the bye week, Cerroni is happy to see that most of his guys were relatively healthy, which is a change from last season.

“From years past, I would give this year an ‘A,’” Cerroni said. “We’re fairly healthy and that’s nice to say. We’re going to get some guys back that we didn’t have so we’ll see how this thing plays out. A year ago we played two Division II schools and they beat us up bad so there were a lot of starters that were hurt. I don’t know if we ever really physically recovered from that.”