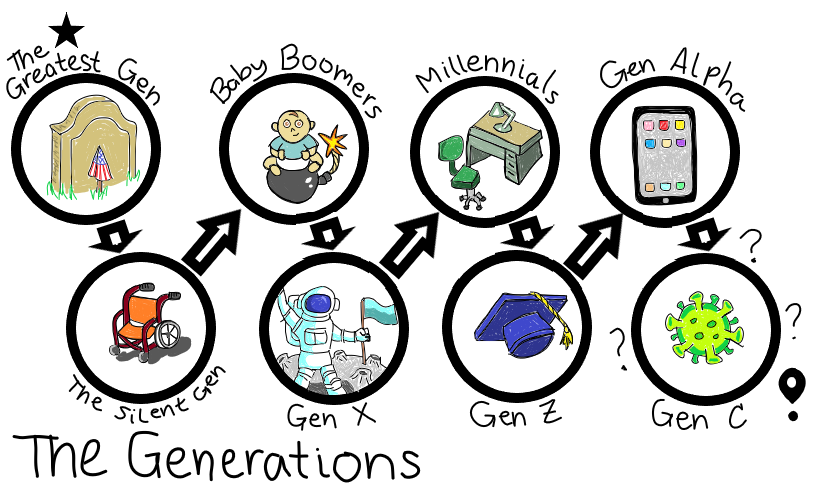 All recent generations have a story and history behind their name, and now there is a new generation of babies emerging through the pandemic awaiting their generation’s name.

One proposed name for this generation is Generation C (as in Generation COVID or Coronavirus), which, hypothetically, refers to the baby boom caused by the COVID-19 pandemic.

Nick Pendle, co-founder of the sexual wellness app Lover, was tasked with conducting a poll to gauge the preferred generation name of COVID-19 babies. Respondents chose from a list of 10 names including: Generation C (COVID-19), Generation Q (quarantine), Quaranteenies, Coronials, Pandemials and a few others.

This generation’s name is not officially chosen; it was only a survey to see what Americans would like to see the next generation named. Pandemic babies rightfully deserve a whole new generation name as this is a monumental time, but only time will tell if babies born or conceived during the pandemic will go on to become known as “Generation C.”

According to Legacy Senior Living, there are four factors that contribute to the formation of the Greatest Generation, which include: sacrifice and honor, momentous changes, work ethic and frugality.

This generation grew up during a period when the world was experiencing strong shifts in power. They lived through the Great Depression, World War II and into one of the most prosperous eras in the history of our nation.

Many gave of themselves during World War II, whether that led to the loss of a limb or a life. Those back home during the war dealt with rationing to make sure soldiers were taken care of.

They are a part of the oldest current living generation, and they sacrificed a lot to get to where they and the rest of us are today.

The Silent Generation, otherwise known as Traditionalists or Radio Babies, were children during World War II and came of age during the 1950s and 60s.

According to FamilySearch, the main characteristics of the generation are: thrifty, respectful, loyal and determined.

The Silent Generation began life in the Great Depression, the Dust Bowl, and during economic and political uncertainty. Living through rationing, these people grew up with a sense of thrifty resourcefulness, they value stability, relationships and religious beliefs.

McCarthyism, the Red Scare, the Civil Rights Movement and the Korean War are also associated with this generation.

The generation name is quite ironic, as many not-so-silent and untraditional members of this generation shaped the world in remarkable ways.

The Baby Boomer generation refers to babies born in years shortly after World War II. The boomers were the largest generational group in the United States until very recently.

As soldiers returned from war, they were ready to start settling down and have families. Through the G.I. Bill, many veterans were given educational and economic opportunities, which helped them own homes and support children.

FamilySearch contributes them to these characteristics: value relationships, goal centric, self-assured and resourceful.

Boomers grew up during the height of the Civil Rights Movement, Sputnik, the Berlin Wall and the Cold War, as well as the start of impressive technological advances.

Generation ‘X’ was used to give the idea that the generation resisted being defined. This generation is also known as Baby Busters, Latchkey Generation and Post-Boomers.

The generation name Generation X was taken from the title of a novel by Douglas Coupland published in 1991.

Gen X grew up with space exploration, tension between the United States and the Soviet Union, the fall of the Berlin Wall, greater development of modern technology and received an emphasis on education.

FamilySearch refers to Gen X as independent, flexible, critical thinkers, and self-reliant. Generation X has done a lot with their greater amount of education compared to past generations.
They are currently trying to raise a family, pay off student debt and take care of aging parents.

Millennials are described as tech-savvy, family-centric, achievement-oriented, feedback-seeking, job-hopping and team-oriented according to The Balance in 2019.

The Census Bureau estimates 83.1 million millennials in the U.S., and the Pew Research Center found that millennials surpass Baby Boomers to be the largest living generation in the United States in 2016.

Millennials account for the fastest growing parts of the workforce, rely on technology in their jobs, use forms of technology nearly 24/7 and bring a variety of experiences into work.

Generation Z is more racially and ethnically diverse than previous generations, on track to be the best-educated generation, have similar viewpoints to Millenials on many major issues, have sharp political differences with their elders, see family and societal change as a good thing and have great comfortability revolving around gender identity.

Gen Z is more likely to have a college-educated parent than previous generations, smartphones and social media are the biggest contributors to communication and the generation has never known a country not at war.

The launch of the iPad in 2010 coincided with the beginning of our current generation of children, Generation Alpha, according to McCrindle.

The Annie E. Casey Foundation shares that every nine seconds, a member of Generation Alpha is born in the United States.

If current trends hold, Generation Alpha kids will be more racially and ethnically diverse than Gen Z, more likely to go to college, grow up in a single-parent household and be surrounded by college-educated adults.