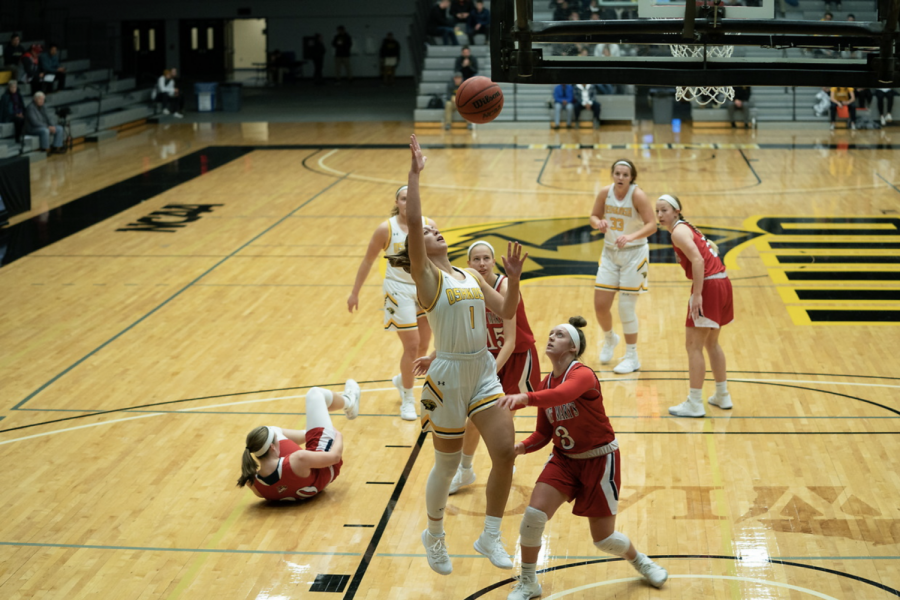 Senior Olivia Campbell drives to the hoop against her opponent in Oshkosh’s 68-54 win over Saint Mary’s University (Minn.).

“\Over the weekend, the UW Oshkosh women’s basketball team competed in the Loras College Tip-Off Classic and had a split record of 1-1. This performance improved their overall record to 2-1.

The Titans’ first matchup was up against the Augustana College Vikings, who they defeated by a score of 65-46. The impressive win was led by Leah Porath’s 22-point performance. Porath shot 9-for-10 from the field and a perfect 4-for-4 from behind the arc.

“I think that we’ve been playing well together,” said Porath. “We’ve been hitting the outside shot pretty well as well as getting rebounds.”

A major key in Oshkosh’s dominant victory was their stellar defense. In all, the Vikings only managed to shoot 42.6 percent (20-47) from the field and 20 percent (2-10) from 3-point range. Among the scoring leaders were Alexis Jones and Gabriela Loiz who paced the Vikings by scoring 10 points apiece.

Ball facilitation also proved to be a key factor in Oshkosh’s successful start to the tournament against Augustana. UWO tallied nine assists while holding Augustana to just five while forcing them to commit 17 turnovers.

Oshkosh lost their first game of the season in their Loras College Tip-Off Classic Championship appearance against Loras College by a score of 88-83 where the game had to go to overtime before it was officially decided. Porath’s layup tied the game and forced overtime when she laid the ball in with seven seconds remaining in regulation.

In overtime, Oshkosh missed a couple of crucial free throws before permanently losing the lead at 86-83. From there, Loras pulled away and secured the win.

“They were really good,” head coach Brad Fischer said. “They had four all-conference players coming back from a 22-win team. I think we answered the bell unfortunately we just couldn’t finish the deal when we got into overtime.”

In terms of what went wrong for the Titans, they were dominated on the boards, being out-rebounded 36-28. These rebounds ultimately helped Loras capitalize more on Oshkosh’s misses than the other way around, considering that both teams shot the ball with a similar success rate. Oshkosh shot the ball at 45.9% and Loras shot the ball 46.8%.

Additionally, Oshkosh didn’t capitalize on turnovers as much as Loras did. Although Loras turned the ball over more than Oshkosh, at a rate of 15-13, Oshkosh was only able to capitalize with 15 points to Loras’ 20.

“We’re not super experienced,” Fischer said. “There’s a lot of little things that we watched in film this weekend that we need to take more seriously on a daily basis. Defensively we have to be a lot more disciplined and more assignment-sound.”

Despite the loss, Oshkosh had a lot to be proud of in this championship match. Leah Porath once again set a new career high in points with 26, while completing her double-double effort with 12 boards.

“She’s playing really confident,” Fischer said. “She’s playing in her own comfort zone right now. She can pick her spots and she is shooting the three incredibly.”

The Titans will travel to Milwaukee next weekend for a pair of games at Wisconsin Lutheran College’s Paul Knueppel Classic. The Titans will open the tournament against 10th-ranked DePauw University (Ind.) on Friday, Nov. 22 in a rematch of the 2019 Oshkosh regional championship game that the Titans won, 54-52, on a basket with less than two seconds remaining.