Donated bikes aim to close the transportation gap in Oshkosh 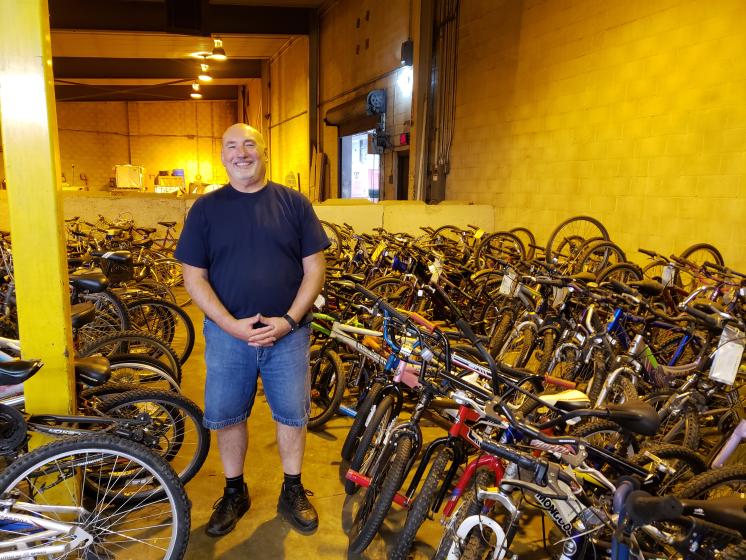 Kaitlyn Scoville / Advance-Titan --Retired police officer Steve Sagmeister has been director of the Oshkosh Community Bike Program for 10 years to help eliminate transportation barriers for those who do not have a driver's license.

Situated in a donated workshop across from Sadoff Recycling at 36 10th Ave., hundreds of bikes of every size and for every age are lined throughout. Helmets are stacked, waiting for their next users at the front door.

Every bike within the workshop has been donated through community members, the Oshkosh Police Department, apartment complexes and other nonprofit organizations in the Fox Valley.

“That’s why we call it ‘Community Bike,’” retired police officer Steve Sagmeister said. “Because it’s not just us, it’s the whole community that donates.”

Sagmeister has been director of the Oshkosh Community Bike Program for 10 years, coming out of the Interfaith Needs Response, where he was repairing bikes as an alternative form of transportation other than cars.

He first noticed that there was a need for transportation for those who, for example, could not get a driver’s license or who worked too early to take public transit.

“Transportation is always a need within the community, whether it’s giving out bus passes, whether it’s [getting] vehicles or, what we do, is providing that leg for people who can’t afford those for just doing basic needs of getting groceries and things like that,” Sagmeister said.

Each year, Sagmeister said that they aim to donate over 400 bikes back to the community.

Sagmeister added that the Bike Program can only be accessed by referral from places such as the Christine Ann Center, Human Services, churches, the Oshkosh Area School District and the Salvation Army.

The Bike Program is only open on Wednesdays from 10 a.m. to 2 p.m., but the group of six retired men is working on expanding their hours.

Sagmeister added that because of the program’s limited hours, those who would like to donate can leave materials by the door outside. He added that the Sadoff employees are nice about bringing anything they see out there inside the workshop when it’s closed.

The thing the program is most in need of at the moment are bike locks. However, anything is appreciated. No matter what the condition of the bike, they will either make them street-safe again or scrap them for parts in other bikes.

Some of Sagmeister’s coworkers said that repairing a bike can take anywhere from 30 minutes to a few days, but every fix is worth it when they know it will help someone who needs it.

“This is my first volunteer job that I’ve ever done,” Jack Verwiel, a volunteer at the Bike Program, said. “I get a lot of satisfaction out of giving when families come in and you see mothers and fathers who can give their kid a bicycle to ride with them.

John Hobbins, Pastor at Zion Lutheran Church and Multicultural Outreach Coordinator for the OASD, said that the crew that repairs the bikes and gives them directly back to the community always outweighs profit.

“[They’re] giving things to everyone else – their time, their talents, their, their space, repossessed bikes – everyone’s working together,” Hobbins said. “There’s almost zero exchange of money. There’s a lot of that going on more where it’s not really about profit, it’s about helping one another.”