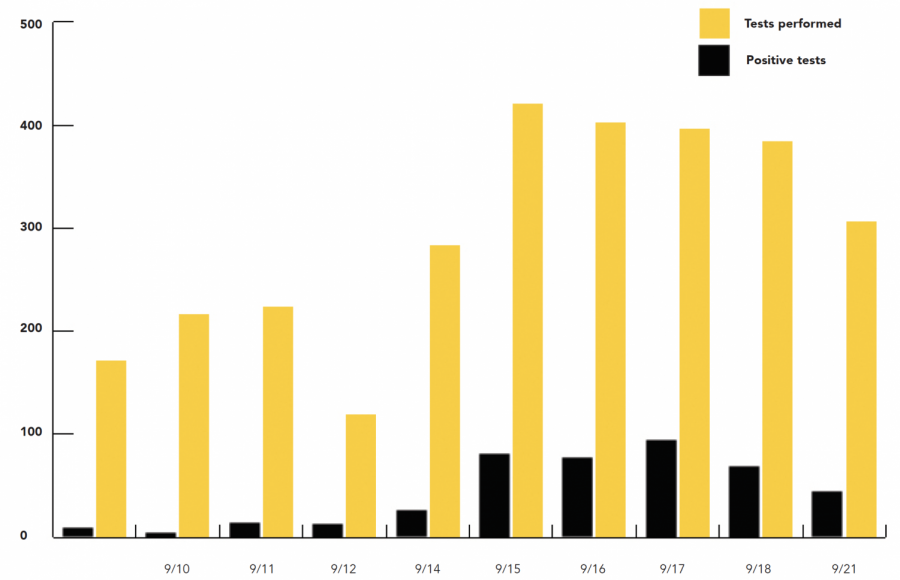 Chancellor Andrew Leavitt and other members of the UW Oshkosh administration answered student and parent concerns related to COVID-19 protocols on campus in a virtual town hall meeting Tuesday.

“There are lots of safety measures and protocols that we need to adjust to, and there are more that we will add,” Leavitt said. “We are stressing individual responsibility to build and preserve a culture of collective safety. Our Titans Return plan works best when people follow the protocols and when we adapt as we go.”

New protocols
The university’s plan to implement additional restrictions on campus came in an email from Leavitt on Tuesday.

“Beginning Thursday, Sept. 24, in-person seating in dining areas will be closed to all students, faculty and staff for two weeks,” Leavitt said in his email. “All food from these locations must be taken to go: Blackhawk Commons, Titan Underground, Reeve Marketplace, Reeve Coffeehouse, Einstein Bros. Bagels, Café Clow and Scotty’s.”
Leavitt also stressed the importance of vigorous and consistent testing at the meeting and in his email.

“Beginning next week, we will test all residence hall students for coronavirus every other week,” Leavitt said in his email.

Director of Risk and Safety Kimberly Langolf said the testing resources on campus are plentiful and they will continue to accommodate any student who wishes to get tested.

“We want anyone that feels like they need to get a test to get a test,” Langolf said. “For off-campus residents, we’ve seen a lot of students that either they’re maybe not having symptoms but maybe they have a close contact or they have a concern and we really try to accommodate them as quickly as we can.”

Tracking student cases
According to Leavitt, the rate of positive tests on campus is around 17%, but the university would like to see it below 5%.

Chief of Police Kurt Leibold said the higher rate of positive COVID cases on campus is in part due to the university’s testing strategy and the number of tests the university administers.

“We know, by design, that we are going to have more positive tests, but the idea is we’re going to take out the positive students and then we should start seeing a decline in our positive numbers,” Leibold said. “We kind of hit that surge, but we’re seeing in the last few days our numbers are starting to come down again.”

Leavitt, who said he spent some time in the isolation residence hall, said the majority of students he talked to had only mild symptoms.

“The No. 1 complaint that they had was the lack of taste or smell,” Leavitt said. “Most of the students were moving around fine.”

As of right now, the Student Health Center is not aware of any student hospitalizations due to COVID.

Langolf said the Student Health Center sees around 10-15 new cases daily, and they’re working to keep in touch with students who exhibit symptoms.

“We in the Student Health Center are following students who are in the isolation dorm who have symptoms,” Langolf said. “So we, daily, are reaching out to students who have been newly diagnosed with COVID-19.”

To keep in contact with every student who has tested positive, the university plans to increase the number of employees available to reach out to those who have tested positive.

“We are hiring some grad students that, on a daily basis, will be making phone calls to every student to follow up, to do wellness checks with them to see how they’re doing,” Interim Vice Chancellor for Student Affairs Art Munin said.

Housing and food refunds
Many students and parents raised the question of being refunded for housing costs if a student wants to leave campus or if classes move fully online.
“Any student that would like to request the cancellation of their housing contract can do so by emailing ,” Munin said. “If you are approved, you do get a refund prorated up to the day that you move out.”

Attendees also raised concerns over the quality of meal plans being offered to those in quarantine dorms and asked if meal plans can be canceled during the semester.

“As long as students live in the residence halls, they are required to have a meal plan,” Interim Assistant Vice Chancellor Jean Kwaterski said. “We don’t have kitchen facilities in all residence halls for students to prepare their own food so I would really want to work with anyone who’s having an issue with the meals.”

As for the quality concerns, Leavitt and Kwaterski assured that the students in quarantine are receiving a variety of quality foods, and UWO food service provider Aladdin is working with the university to better the meals students receive.

“We have frozen entrees which are freshly prepared and then frozen,” Leavitt said. “You have fresh food, you have fruits and vegetables, and so you have, I think, a pretty good sampling of different kinds of food that’s available to students.”

“I do understand that there were some disappointing meals in the beginning of the semester, and Aladdin has stepped up and made changes at Blackhawk Commons,” Kwaterski added. “I know they are always willing to hear from us when it comes to issues that we’re hearing about.”

Kwaterski said if students or parents have concerns about the meals being served to students, they can direct questions to .

Making the move to online?
In Leavitt’s email, he states: “You may have heard of other UW System campuses moving all instruction to online. We are not taking that step here at UWO.”

He said they expected a rise in cases when the semester commenced, but the rise is not coming from in-person learning.

“We know from the data that the transmission of the virus is not occurring in the classroom, or quite frankly even in academic buildings,” Leavitt stated. “If we had a high rate of infection in the classroom, then I would say yes, going online for two weeks would be a good way to knock [the positive cases] down.”

Because faculty and staff are not being impacted by COVID yet and the cases seem to be coming from the residence halls, Leavitt said they have no plans to move classes fully online.

Leavitt said they were expecting some students to behave recklessly and put others at risk by not following the university’s protocols, and he said in his email that students who don’t follow safety protocols could face probation or suspension.

He asks students to continue to wear masks, socially distance and to stop their reckless behaviors for the good of the campus.

“We will climb out of this; how quickly we are able to move forward, at this point, is largely dependent on your willingness to do everything you can right now to keep yourself and others safe,” Leavitt said.

For more information on COVID protocols on campus, visit the Titans Return website.