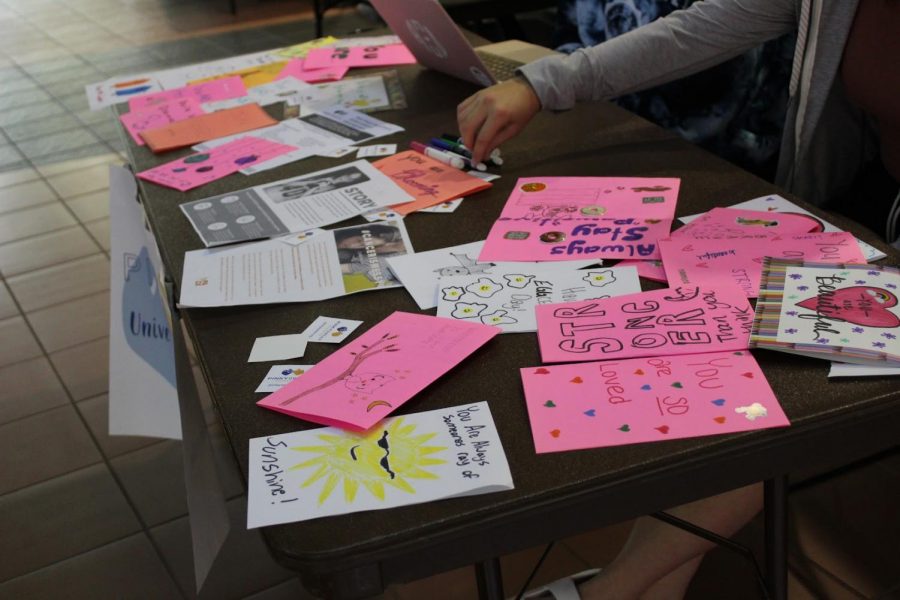 Courtesy of the Advance-Titan

The Pinky Swear Foundation has been helping kids with cancer and their families with financial and emotional support since 2003, but has recently expanded to college campuses in June of 2020.

Previously known as the Love Your Melon club that got shut down due to COVID-19 at UWO, the Pinky Swear Club took its place this school year.

“Basically, we want to help children and their families that are suffering from cancer,” said senior Jackie Goldman.

Goldman is in charge of PR and Advertising of the club, and she spent some time at their first official event on campus other than their booth at Taste of Oshkosh on Sept. 7.

The first event of the club was cardmaking for children with cancer, which was held in the Reeve Union Concourse eight a.m. to five p.m on Sept. 20.

There was a great outcome from the event in which both students and staff showed up.

“[Other club members] have said that staff and students have said ‘my so and so has cancer’ and they’ve been really happy to be [making cards],” Goldman said. “A lot of people don’t know about our club since we are so new, so I think it’s a great amount of exposure we’re able to get.”

“I joined because it seems like a good cause,” Tackett said. “I was looking for something to do on campus to get involved in.”

Sophomore Becca Best was walking to buy a ticket for the UWO Chicago Bus Trip when she saw the tables with markers and stickers to make a card.

“The event meant a lot to me,” Best said. “While I was making my card, I thought about the strength that the child who would read the card has. Making the card didn’t take long, but who knows how long these kids will have these cards and read them on the bad days.”

Best’s grandma passed after a long battle with cancer, so any cancer fundraisers or support efforts she appreciates and will contribute time or money to.

For her card, she wrote “Stay Pawsitive” on the front and decorated it with fun dog and cat stickers.

“You truly never know how much something like a card with some dog stickers on it will help someone get through a hard time,” Best said.

The club hopes to expand and get more awareness. If interested in learning more about the club, reach out to President Aly Boettcher at .